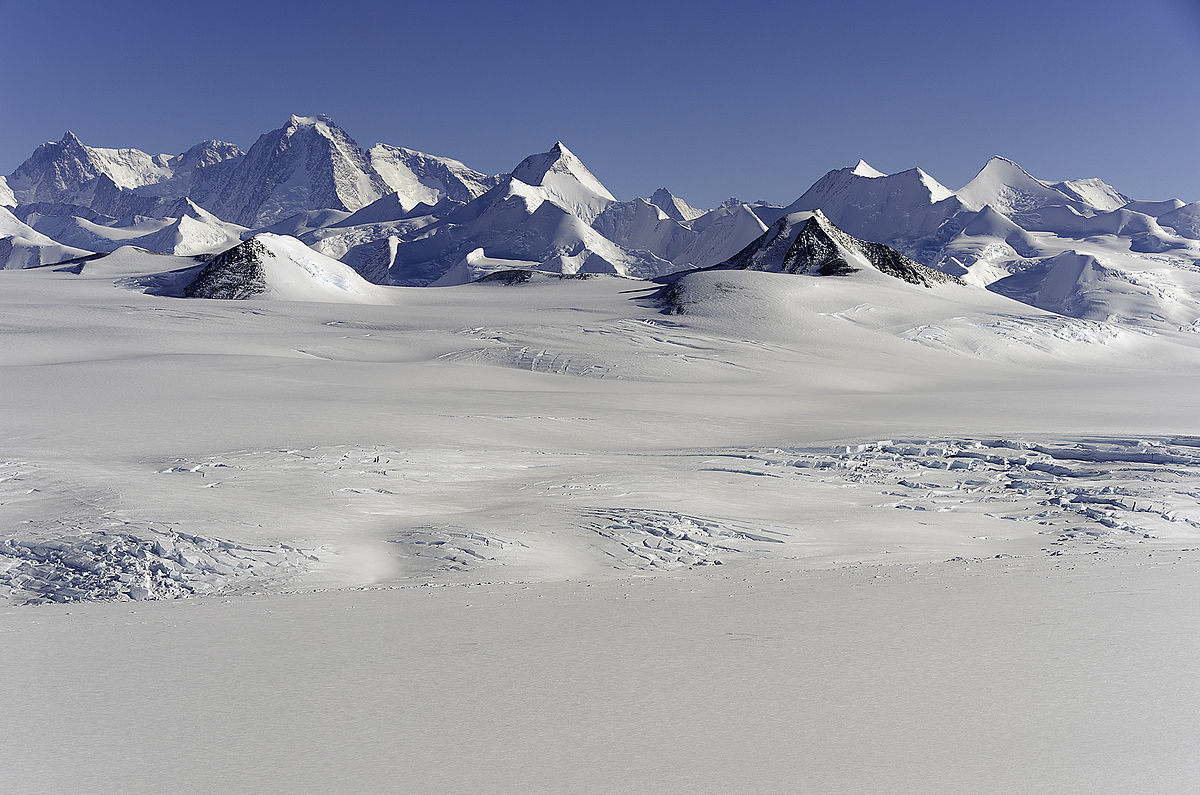 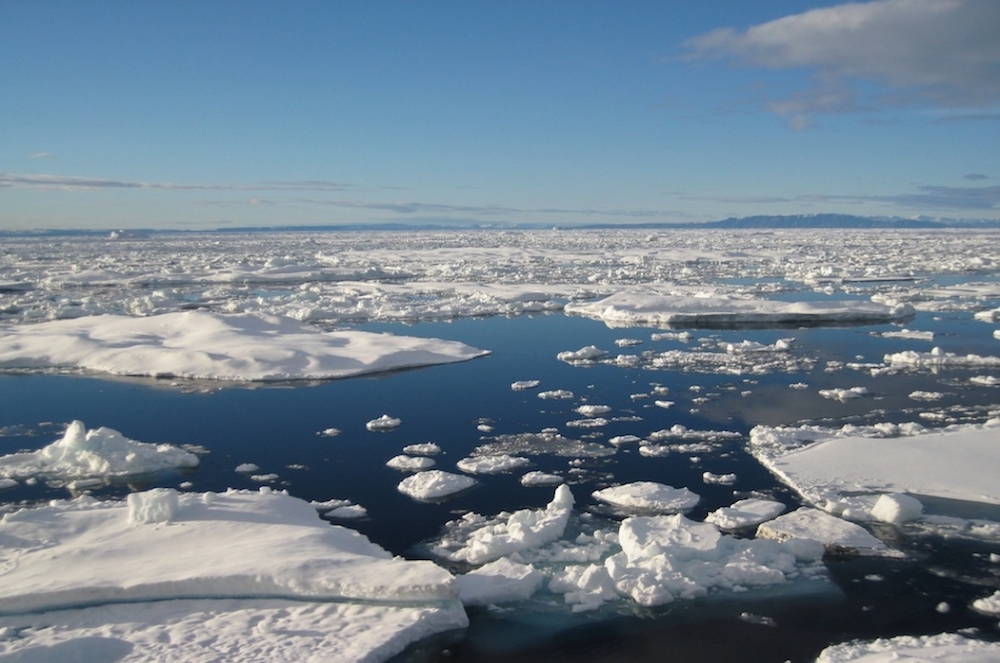 Because of the earth's tilt and orbit around the sun, the poles receive less energy and heat from the sun. This results in only two polar two seasons—summer and winter. In summer at the poles, the sun does not set, and in winter the sun does not rise. 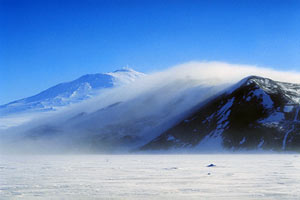 The snow and ice covering Antarctica reflects most of the sun’s light and makes it the coldest place on Earth. ©Digital Vision. 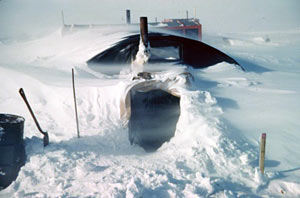 Horizontally blowing snow streaks across the front door of a quanset hut used by NOAA in 1950. Photo courtesy of the NOAA Corps Library.

Why is Antarctica colder than the Arctic?
The main reason why Antarctica is colder than the Arctic is that Antarctica is a continent surrounded by an ocean while the Arctic is an ocean almost completely surrounded by continents and Greenland. The Arctic's ice is relatively thin compared with Antarctica and it has water, not land, under it. While the water is not warm, it usually stays around 30° F, which is often significantly warmer than the air above the ice. Some of this heat makes its way through the ice to the air moderating temperatures somewhat. By contrast, Antarctic has a higher average elevation that any other continent on Earth, and it is covered by a few thousand feet of ice. All the snow and ice covering the continent reflects most of the sun’s light and makes Antarctica the coldest place on Earth.

Antarctica:
The coldest time of the year is usually September, and mean winter temperatures are -40 to -70°C (-40 to -94°F). During winter, the size of Antarctica doubles as the surrounding seawater freezes. In the summer, mean temperatures range between -5 to -31°C (-15 to -35°C). There is very little precipitation—less than 10 cm (4 in) in a year – and the continent is as dry as a desert. Strong winds lead to low effective temperatures (see classroom activity below).

Arctic:
The Greenland ice sheet and the Arctic Ocean maintain cold temperatures throughout the year, but the tundra-covered coastal areas warm up each summer for a brief period. The coldest time of the year is usually March but, because salt water freezes at -1.8°C (29°F), the ocean temperature never gets below that. However, the continental parts of the Arctic can get very cold—the coldest average temperature is -68°C (-90°F). The Arctic also has low precipitation, with an average of less than 51 cm (20 in) each year. 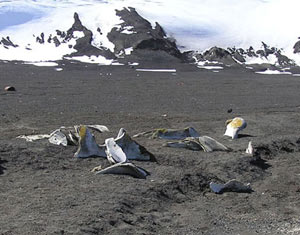 The high tide line traces a path along the beach to bleached whale bones on Antarctica's Deception Island, the site of many whaling stations in the early 20th century. (Photo by Regina Campbell-Malone, WHOI) 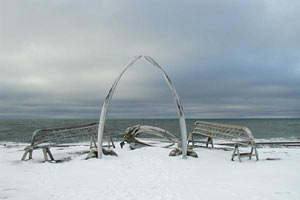 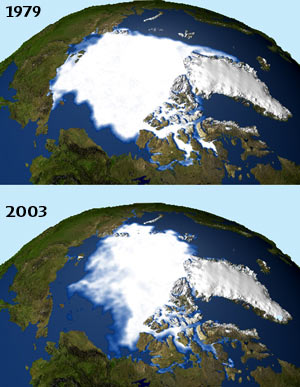 A composite from NASA showing how the ice is receding in the Arctic from 1979 to 2003.

Harvesting from the sea

When early Arctic and Antarctic explorers returned home and described the abundance of seals and whales they had seen, sealers and whalers were drawn to these new waters to hunt the valuable animals. Hunting was so intense that some species were driven nearly to extinction, and sealing and whaling slowed down only when there were too few left to make the hunts profitable. Agreements among nations now protect most seals and whales limiting how many can be killed.

Populations of most Antarctic seal species have increased dramatically. Most whale species, though, still number fewer than they once did, and some nations continue whaling in polar waters. Today, the bowhead whale is the only truly endangered Arctic mammal.

Harvesting from the land

There are no terrestrial mammals in the Antarctic, but the Arctic has plenty of mammals, including musk ox, reindeer, caribou, fox, hare, wolf, lemming, bears, and more.

The Inuit of the historical era have largely been dependent on mammals for warm clothing; the bearskin winter trousers of the Greenland hunter have been as distinctive as the guardsman's busby. Caribou killed in August, when the new hair is still short and fine, provided the most popular clothing skins. Musk ox robes and skins of caribou killed in winter were used for bedding.

With social and industrial development, conservation of Arctic fauna has demanded increased attention. Recent developments include restrictions by the US on the import of sea mammal products; imposition by the International Whaling Commission of quotas on the take of bowheads by Alaskan native hunters; signing of an international convention on the conservation of the polar bear (particularly on the high seas) by the US, Norway, Denmark, the former USSR and Canada; and the devolution of game management authority to Canadian Inuit organizations after land claim settlements.

Other threats to Arctic animals may include the impact of pollution (industrial and military) from the south on more fragile ecosystems, and more harvesting pressure as human populations grow.

Global Warming: Is the Ice Melting?

In 2005, the ice cap covering the Arctic Ocean shrank to its smallest size since researchers began keeping records a century ago. In the past five years, scientists reported that many Greenland glaciers are sliding faster to the sea and melting at their edges.

Melting sea ice has consequences. If the sea ice disappears, heat from the sun—which mostly reflects off white ice surfaces and back into space—instead would be absorbed by the ocean. This would further accelerate the warming of the Arctic resulting in more warming. Melting glaciers on land would raise sea level.

Melting sea ice also means more fresh water in the ocean, which could flood into the North Atlantic. That could disrupt a global system of currents, known as the Ocean Conveyor. The Conveyor brings warm, salty Gulf Stream waters northward, where they release heat to the atmosphere in winter and temper the North Atlantic region’s climate. The waters then become cold enough again to sink to the abyss, propelling the underside of the Conveyor.  If more cold, fresh water is added to the North Atlantic it could put a lid of lighter water over the warm water and block it from releasing its heat to the atmosphere and sinking to drive the Conveyor. This could significantly cool the climates of Europe and North America.

Let's see how the ocean circulates in the North Atlantic.