Oceanography may be one of the newest fields of science, but its roots extend back several tens of thousands of years when people began to venture from their coastlines in rafts. These first seafaring explorers, navigators and oceanographers began to pay attention to the ocean in many ways. They observed waves, storms, tides, and currents that carried their rafts in certain directions at different times. They sought fish for food. They realized that although ocean water didn’t look different from river water, it was salty and undrinkable. Their experiences and understanding of the oceans were passed down over thousands of years from generation to generation in myths and legends.

But it wasn’t until about 2,850 years ago (850 BC) that early naturalists and philosophers started trying to make sense of the enormous bodies of water they saw from land. Because people could see only endless ocean from the shoreline, they believed the world was flat. That didn’t keep Columbus and others exploring the oceans in the late 1400s and early 1500s and finally discovering that the world is not flat, but round—a sphere whose surface is nearly 3/4—covered by oceans.

Modern oceanography began as a field of science only a little less than 130 years ago, in the late 19th century, after Americans, British and Europeans launched a few expeditions to explore ocean currents, ocean life, and the seafloor off their coastlines. The first scientific expedition to explore the world’s oceans and seafloor was the Challenger Expedition, from 1872 to 1876, on board the British three-masted warship HMS Challenger.

But modern oceanography really took off less than 60 years ago, during World War II, when the U.S. Navy wanted to learn more about the oceans to gain fighting advantages, especially in submarine warfare. This section of Deeper Discovery will give you some background and history on the science of oceanography. It will show you how important early studies were and how far we have come since then in understanding the oceans and seafloor—Earth’s inner space. 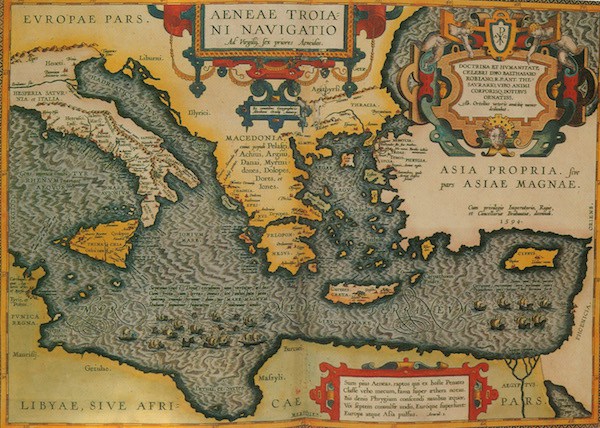 A map of the Mediterranean Sea made in 1595 by Abraham Ortelius, a Dutch cartographer. (Courtesy of Cartographic Associates)