The Age of Discovery

Voyages of Exploration and Science

About 650 years ago, European explorers turned to the sea to find faster trade routes to cities in Asia and Europe. Prince Henry the Navigator of Portugal recognized the oceans’ importance to trade and commerce and he established a center of learning for the marine sciences. You could think of it as the first oceanographic institution. Mariners came to the center in Sagres, Portugal, to learn about the oceans and currents and how to make maps. These early maps provided the basis for important expeditions. In the late 1400s, Cristopher Columbus became the first European to sail westward across the Atlantic Ocean and return home. In the early 1500s Ferdinand Magellan sailed all the way around, or circumnavigated, the globe.

In the early 1700s, several European countries (mainly Spain, France and Britain) sought to expand their empires and discover new lands for raw materials, colonies or trade, and for spices from the East Indies, which they believed would help cure the Plague. They launched expeditions to survey faraway lands across the Atlantic, Pacific and Indian Oceans, and in doing so also explored the Arctic and Antarctic Oceans.

One of the most famous voyages of discovery of this time began in 1768 when the HMS Endeavour left Portsmouth, England, under the command of Captain James Cook. Over 10 years Cook led three world-encircling expeditions and mapped many countries, including Australia, New Zealand and the Hawaiian Islands. He was an expert seaman, navigator and scientist who made keen observations wherever he went. He was also one of the first ship captains to recognize that a lack of Vitamin C in sailors’ diets (due mostly to a lack of fresh fruit) caused scurvy, a serious disease that killed many sailors in those times. Cook always sailed with lots of pickled cabbage, which he insisted that the sailors eat. Scurvy was never a problem on his ships because the cabbage contained lots of Vitamin C.

In 1728, John Harrison, a British cabinetmaker and inventor, started working on an important instrument to aid seafarers navigating across large areas of ocean, far away from land or coastlines. At the time, pendulum clocks kept time. Obviously, these clocks did not work well on a ship on the rolling ocean! In 1736, after years of work, Harrison invented a clock that used a spring instead of a pendulum. It was the first marine chronometer, an instrument that could give accurate time on a rolling ship. With it, sailors could figure out how far east or west they had gone from 0° Longitude, or the prime meridian, and what longitude they were sailing past. By 1761, Harrison had built four clocks, each better than the one before. The last clock was tested on a voyage between England and Jamaica, and it kept excellent time. It ran only about 5 seconds slow per day, and the ship steered a clear course to Jamaica, a true feat in those days. 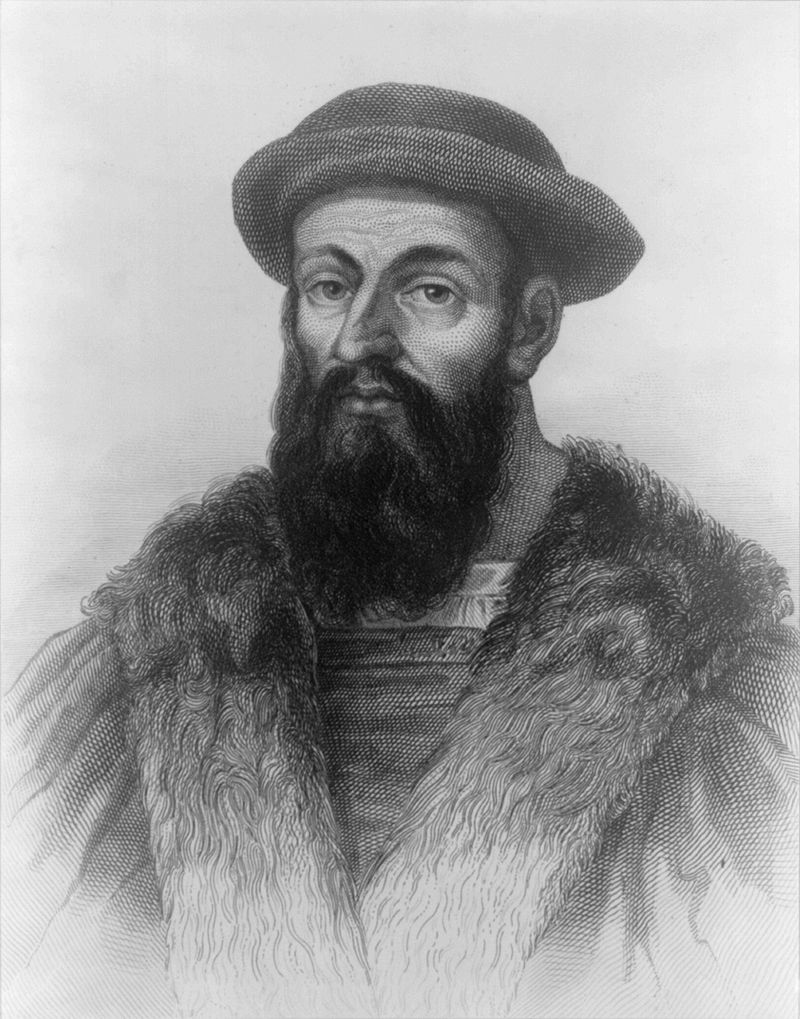 Painting of Ferdinand Magellan, the Portuguese navigator. Magellan was the first European explorer to cross the Pacific Ocean and the first to sail around the world. The painting is in the Palazzo Farnese in Caprarola, Italy. (Public Domain) 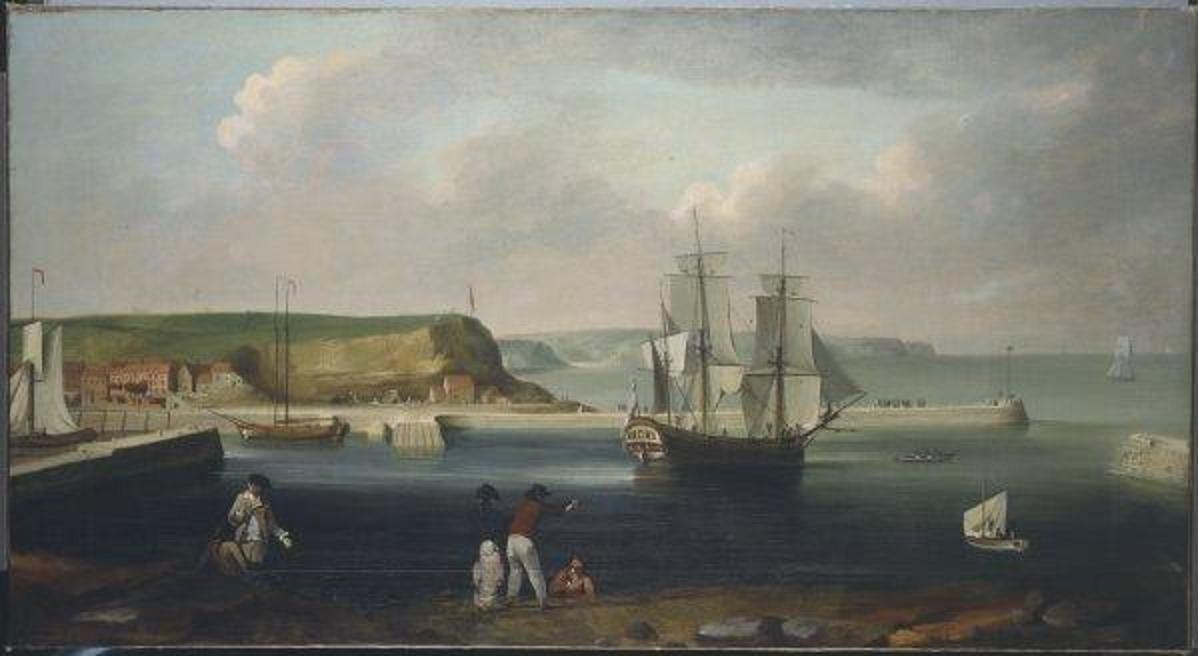 Painting of the Earl of Pembroke, later HMS Endeavour, leaving Whitby Harbour in 1768. 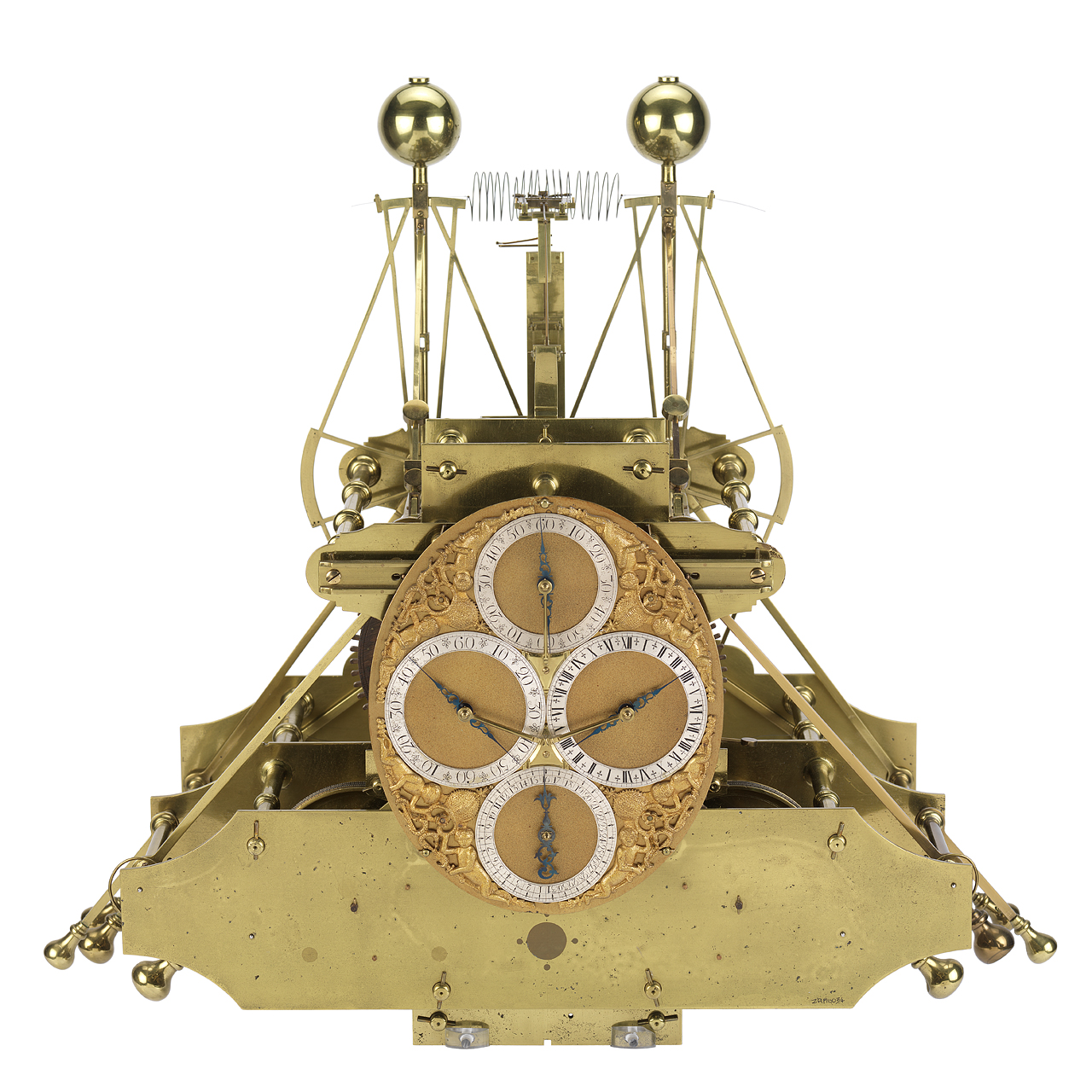 H1 was built between 1730 - 1735 by John Harrison and is essentially, a portable version of Harrison’s precision wooden clocks. It is spring-driven and only runs for one day (the wooden clocks run for eight days). All of the moving parts are counterbalanced and controlled by springs so that, unlike a pendulum clock, H1 is independent of the direction of gravity. The linked balance mechanism also ensures that any change in motion which affects one of the balances is compensated for by the same effect on the other balance. 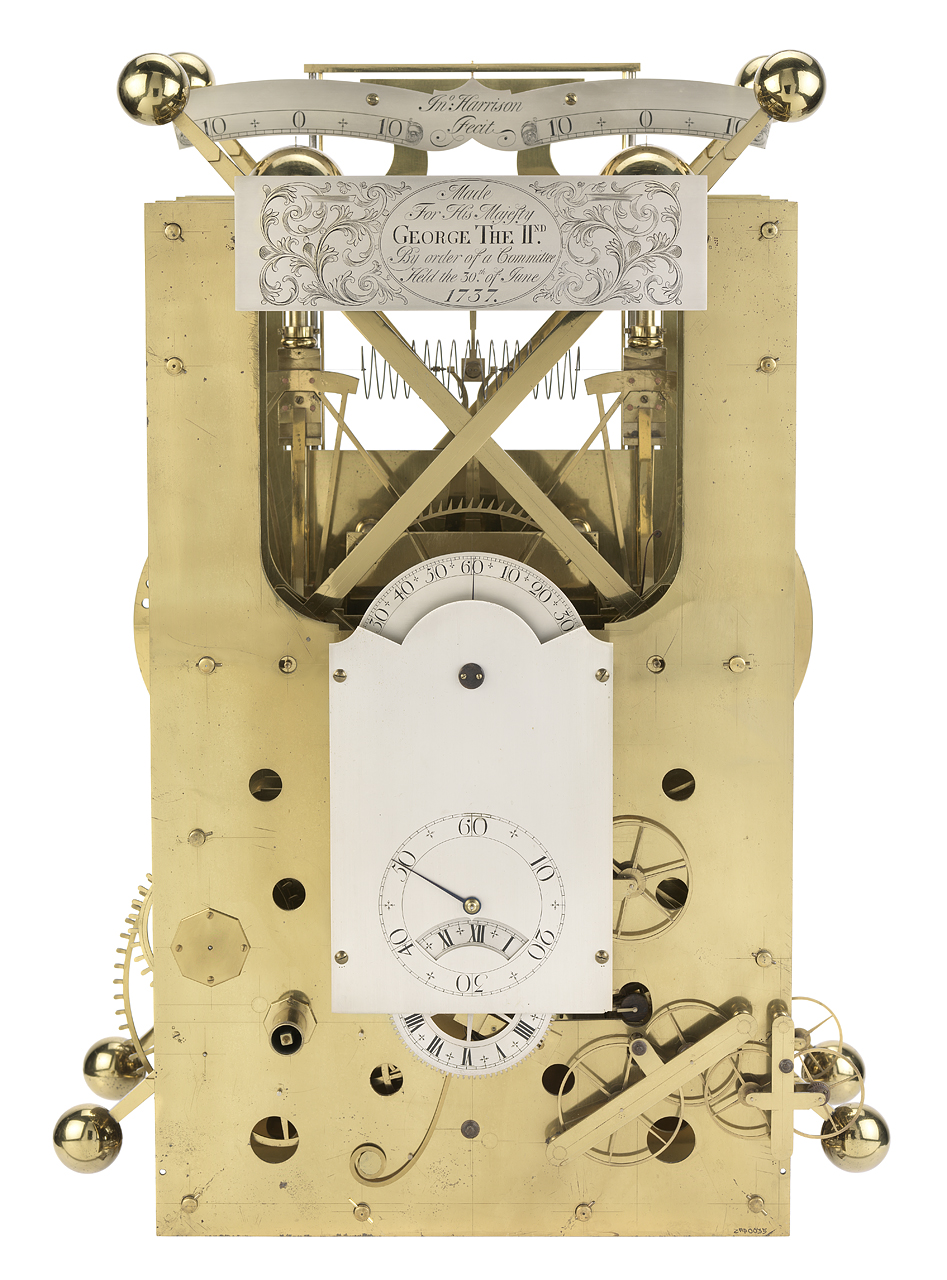 H2 was built in 1737-1740. It is larger and heavier than H1 and is basically the same design. In 1740, Harrison realized a deficiency in its design so he abandoned H2 and started to work on H3. 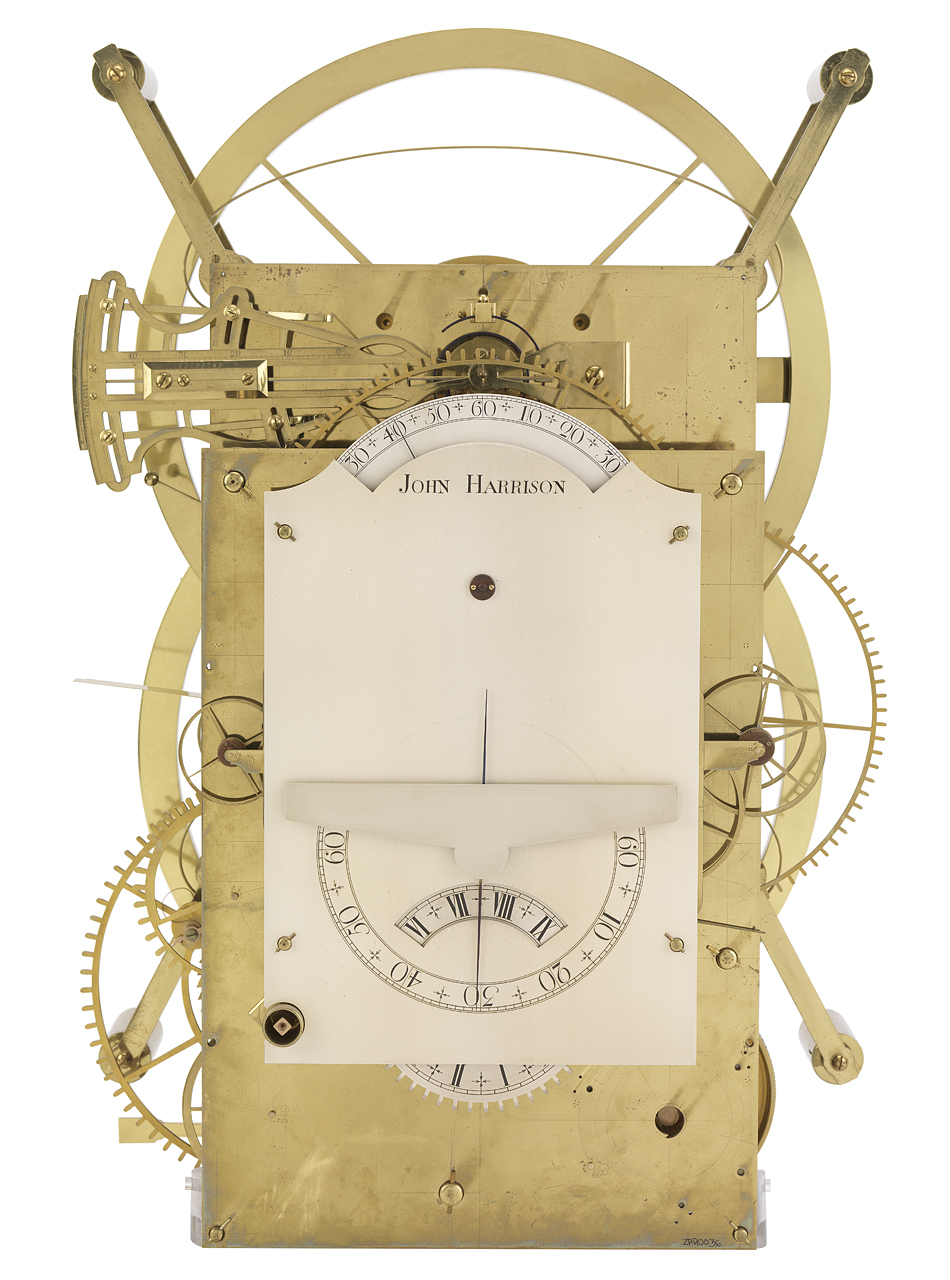 H3 was built during the period 1740 to 1759. Even after 19 years of work on it H3 did not meet the accuracy required by the Board of Longitude. H3 incorporated two inventions of Harrison’s, a bimetallic strip, to compensate the balance spring for the effects of changes in temperature, and the caged roller bearing, the ultimate version of his anti-friction devices. Both of these inventions are still used in a variety of machines today. Despite these innovations, work on H3 seemed to lead nowhere and its ultimate role was to convince Harrison that the solution to the longitude problem lay in an entirely different design. 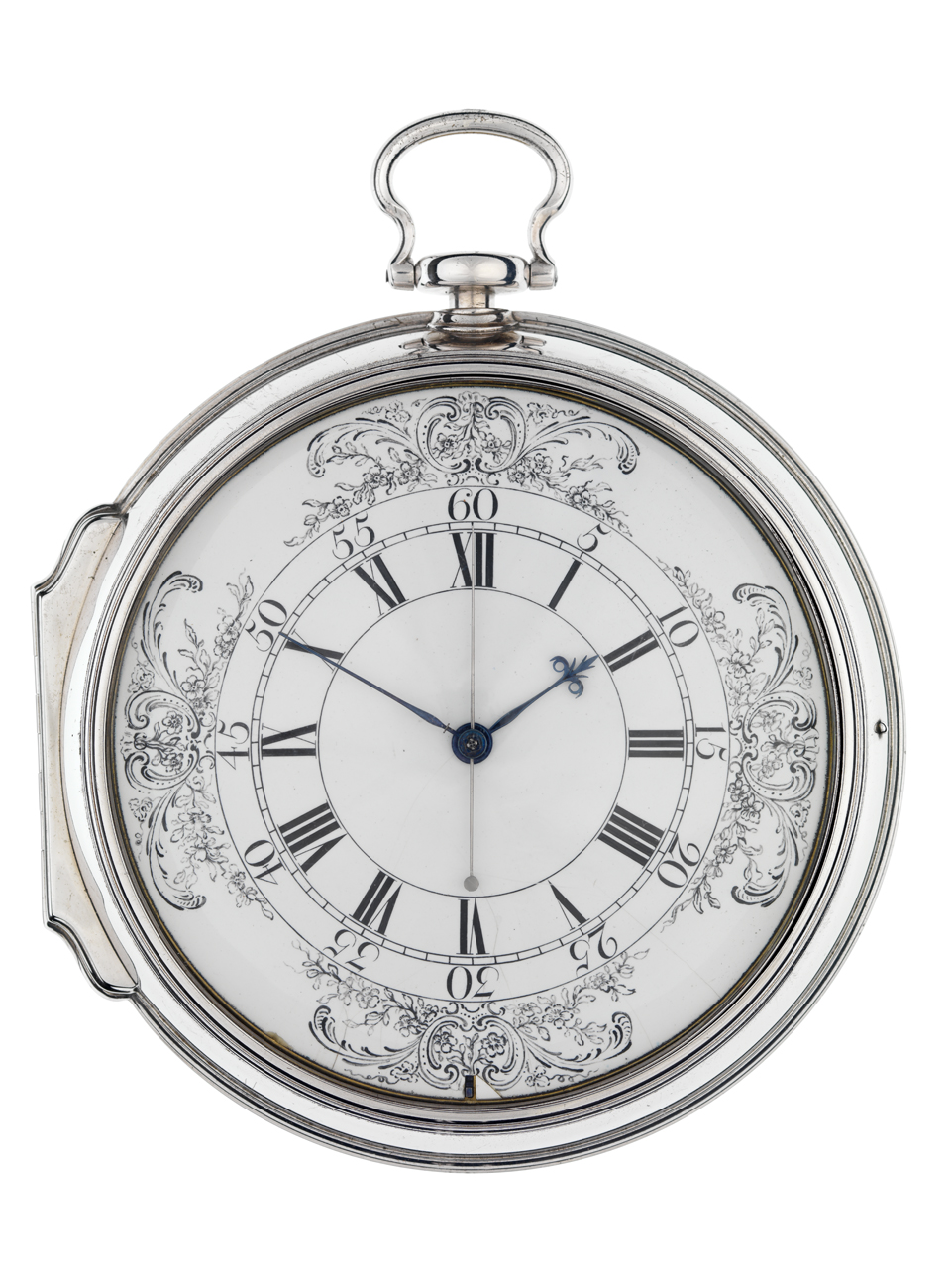 H4 was completed during the period 1755 to 1759. In 1753, Harrison had commissioned John Jefferys, a London watchmaker, to make him a watch following Harrison’s own designs. Harrison discovered with his new watch that if certain improvements were made, it had the potential to be an excellent timekeeper. H4 is completely different from the other three timekeepers. It is just 13cm in diameter and weighs 1.45kg; it looks like a very large pocket watch. Harrison’s son William set sail for the West Indies, with H4, aboard the ship Deptford on November 18, 1761. They arrived in Jamaica on January 19, 1762, where the watch was found to be only 5.1 seconds slow!