Today, icebergs and sea ice are found in the world's coldest oceans of the Antarctic and Arctic, and glaciers are found at the tops of the highest mountains. But ice on the continents and around the polar seas has grown and retreated many times in the last few million years.

Here is a recent example of showing that glaciers can advance and retreat. The etching done in 1850 is of the Argentine glacier above the town of Argentine, France, and shows the glacier extending down to the edge of the town. In the photograph taken in 1966 of the same area, the valley above the town is ice-free. This is a modern-day example, but how often do ice ages occur? 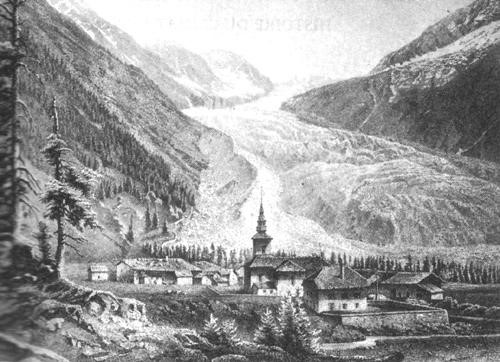 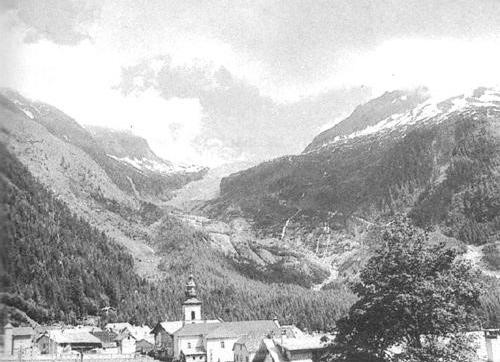 1966 Argentine, France, where the glacier has retreated.

Using chemical information collected from ice cores and from shells of organisms preserved in deep-sea sediments, geologists have been able to map out how Earth's climate has changed over time. Climate swings between cold periods, called glacials, and warm periods, called interglacials. We are currently in an interglacial period.

There are several natural forces that together lead to an ice age on Earth.

Shape of the Earth’s Orbit

If the Earth were the only planet orbiting the sun, its path would be circular. But there are other planets circling the sun too. Their gravity pulls slightly on the Earth as they pass nearby, causing the Earth’s orbit to change by a very small amount. The Earth’s orbit changes from circular to slightly elongate and back again about every 100,000 years.

Here’s how it works. On one side of its orbit around the sun, the Earth is tilted towards the sun. During this time, the northern hemisphere receives more heat so has higher temperatures—it is summer.

Six months later, the Earth is on the other side of its orbit, and the Earth is tilted away from the sun. Now, the northern hemisphere receives less heat so it is colder—it is winter.

However, the Earth’s tilt changes from 22° to 24° and back again about every 40,000 years. Right now, it is tilted at 23.5°. When the tilt is at its greatest, differences in temperatures between summer and winter will be greatest.

Like a spinning top as it is slowing down, the Earth’s axis wobbles in a circle every 23,000 years.

Because of this wobble, the Earth moves just a little bit more than one complete orbit each year. So, for example, if the Earth is in one place its orbit on, say, 1 July, it will be just a little bit further around the orbit on 1 July of the following year. This is called “precession.”

If Earth’s orbit is slightly elongate, then the distance between the sun and Earth will be different each 1 July, making the summer either cooler or warmer.

Glacial periods occur when the Earth's orbit is elongate, when the Earth's axis has a low tilt, and when northern hemisphere summer occurs at a position on the orbit farther away from the sun so that it is cool.