The Keys to Modern Earth and Oceanographic Sciences

Until only recently, geologists had thought that Earth’s surface hadn’t changed much since the planet formed 4.6 billion years ago. They believed that the oceans and continents were always where they are now.

But less than 100 years ago, a German scientist named Alfred Wegener took notice of some interesting findings. Similar plant and animal fossils were found in both Africa and South America and on other continents separated by oceans. Similar rock formations were also found on distant continents. This suggested that the formations were once whole and later divided.

Wegener also noticed that if you could shove western Europe and Africa together with North and South America, their coastlines would fit together very neatly. All this evidence led Wegener to believe that the continents were once connected but had separated and drifted apart.

In 1915, Wegener proposed his continental drift theory. He said that the continents floated atop the mantle-a heavier, denser layer of rocks deep within the earth. Wegener predicted that heat rising within the hot mantle created currents of partially melted rocks that could move the continents around the earth’s surface.

Like many revolutionary theories, Wegener’s was not initially accepted by scientists. The “good fit” of the continents and the fossil and rock evidence did not provide enough proof. For decades afterward, scientists still did not understand how massive continents could be transported across the face of the Earth, and they had no evidence of any process that could cause continents to move.

In the 1950s and 1960s, marine geologists such as Bruce Heezen, Marie Tharp, and Henry Menard used data from echo sounders to map ocean ridges in the North Atlantic and the Pacific. They noticed first that these ridges stretched on for thousands of kilometers in long, continuous mountain chains that wound around the Earth’s surface, almost like the stitches on a baseball. The scientists also observed that the crest of the ridges had a topography that closely resembled volcanic rift zones on land. At their crests, they had V-shaped central valleys with steep faults on either side. This evidence led early marine geologists to deduce that the mid-ocean ridges were formed by seafloor volcanoes.

When these volcanoes erupted, they spewed out lava that cooled and solidified to become new seafloor. It was soon discovered that when this lava cooled, magnetic particles within it aligned with Earth’s magnetic field. After World War II, when magnetometers began to be used to survey the seafloor’s magnetic properties, scientists were surprised to learn that Earth’s magnetic field had flip-flopped many times over its history, with the north and south poles exchanging places! So depending on when seafloor rocks were formed, their particles are aligned in either one direction or the other, and they are said to have either positive or negative magnetic anomalies.

In the late 1960s, magnetometer data revealed an alternating “striped” pattern of seafloor rocks. Rocks that formed when Earth’s magnetic field was in one position alternated with rocks that formed when the field was reversed. The stripes ran parallel to the mid-ocean ridges and extended out hundreds of miles on either side of them. The seafloor’s permanent magnetic signatures showed that new ocean crust was created at the ridge crests and then spread outward in both directions.

This seafloor spreading hypothesis had been proposed a few years earlier by Harry Hess, a petrologist at Princeton University, and Robert Dietz, an oceanographer in the US Coast and Geodetic Survey (the federal department that made maps of the oceans and US coastlines). Hess went on to say that as the ocean crust spreads and cools over millions of years, it becomes denser and eventually sinks down into oceanic trenches, or subduction zones, a long way from where it forms at the mid-ocean ridge crest. As ocean crust descends toward the hot mantle, it melts and becomes recycled into the mantle.

Volcanoes and earthquakes are common in subduction zones, which often occur at the edges, or margins, of continents. The Rim of Fire, which is named for its volcanoes and earthquakes, is created by a series of subduction zones along the coastlines surrounding the Pacific Ocean-from western South and Central America to the Aleutian Islands in Alaska, down the western Pacific, from Japan and the Philippines, all the way to Indonesia and New Zealand.

In 1965, a Canadian geophysicist, J. Tuzo Wilson, combined the continental drift and seafloor spreading hypotheses to propose the theory of plate tectonics. Tuzo said that Earth’s crust, or lithosphere, was divided into large, rigid pieces called plates. These plates “float” atop an underlying rock layer called the asthenosphere. In the asthenosphere, rocks are under such tremendous heat and pressure that they behave like a viscous liquid (like very thick honey). The term “continental drift” was no longer fully accurate, because the plates are made up of continental and oceanic crust, which both “drift” over Earth’s face.

Tuzo Wilson predicted three types of boundaries between plates: mid-ocean ridges (where ocean crust is created), trenches (where the ocean plates are subducted) and large fractures in the seafloor called transform faults, where the plates slip by each other. Plate tectonics has provided a unifying theory that explains the fundamental processes that shape the face of the Earth. 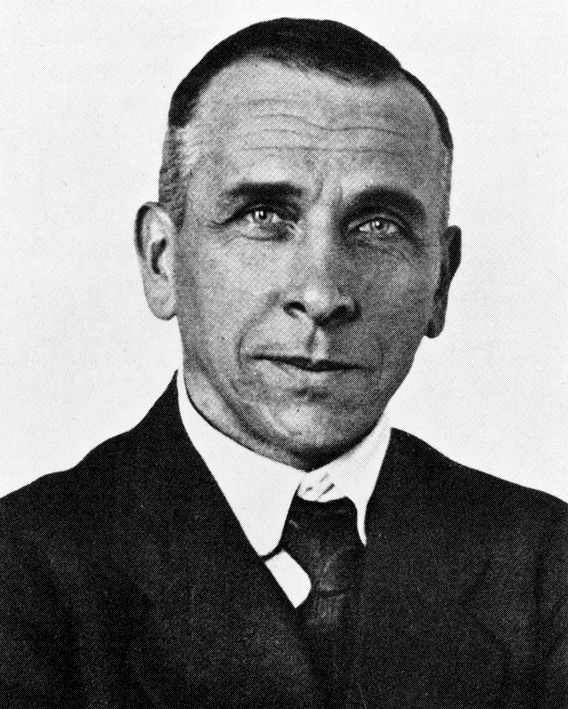 Alfred Wegener was born in Berlin, Germany on November 1, 1880. He spent a great deal of time in Greenland as part of several exploration and research expeditions. His book “The Origin of Continents and Oceans” was originally published in Germany in 1929 and was instrumental in the development of the theory of seafloor spreading. Wegener died on the ice in Greenland in Nov. 1930. 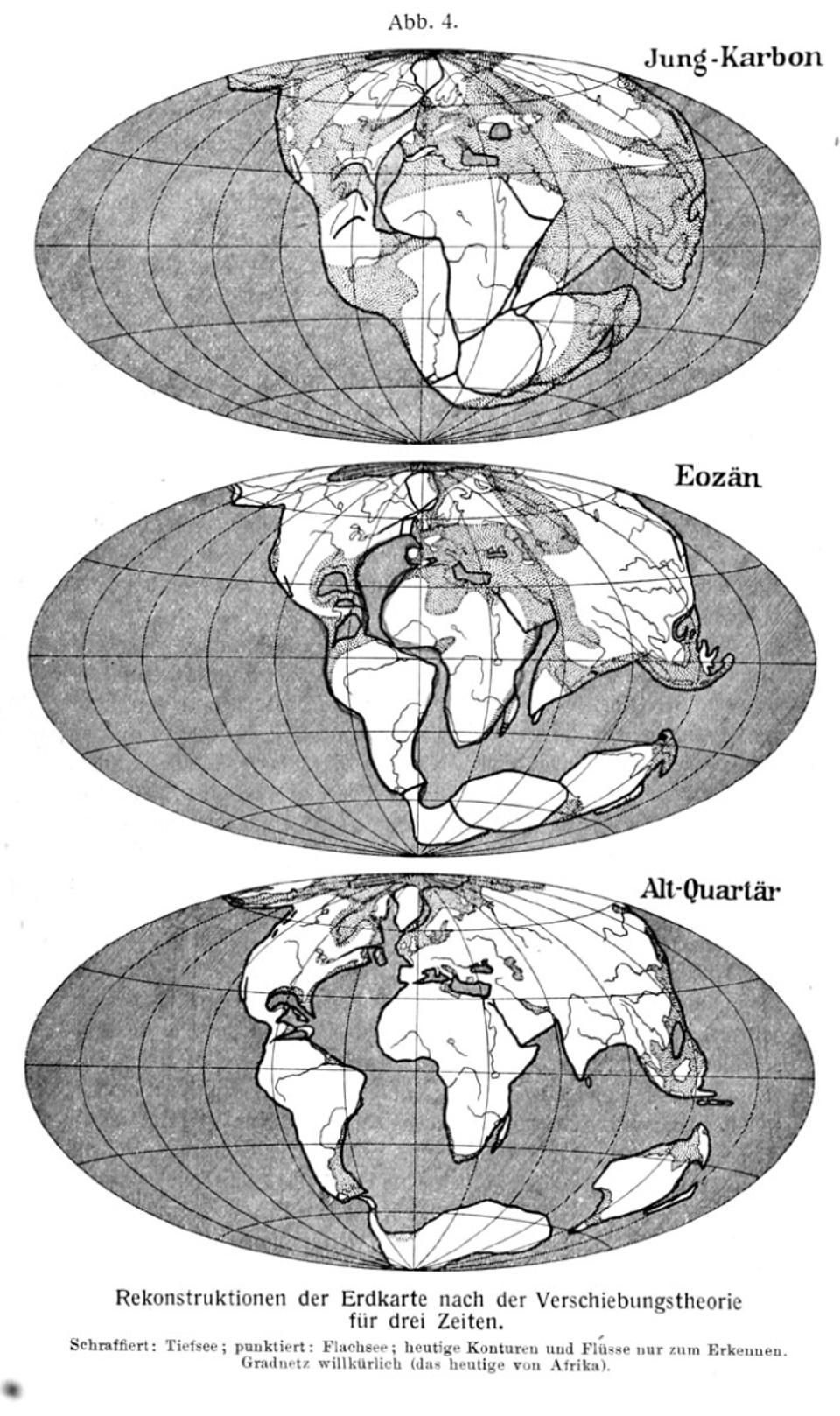 Reconstruction of the map of the world according to drift theory for three epochs, the upper one is the upper Carboniferous, the middle one is for the Eocene, and the lower one is for the Lower Quaternary. The dotted areas on the continents are areas where shallow seas existed during those time periods. This figure appears as Figure 4 in Wegener’s book.