Most people know that Antarctica is the coldest place on Earth, with fewer than 1,000 people living there (none permanently). But did you know it is the world's largest desert? That it hosts huge volcanoes? Has a lake the size of Lake Ontario located entirely beneath the ice?

Imagine flying in a plane over Antarctica, the southernmost continent and the coldest and driest region on earth. From the air, you see that it covers a huge area, about 14 million square kilometers (5.4 million square miles), about half the size of the United States. Antarctica is just slightly larger than another continent in the southern hemisphere, Australia.

You also see that it is quite mountainous. Antarctica has an average elevation of 2,300 meters (6,500 feet) making it the highest continent on Earth.

As your plane circles over the landscape, you note that Antarctica is divided into unequal eastern and western portions by the Transantarctic Mountain chain, which is about 100 million years old. East Antarctica is a platform about 1,600 feet (488 meters) above sea level, composed of rocks more than 550 million years old, with younger rocks on top.

Under the surface of Antarctica, all is not cold and quiet. In fact, there is an active volcano in Antarctica: Mount Erebus, which is 3,794 meters (12,447 feet) in height, is located in East Antarctica, on the edge of the Ross Ice Shelf—a place where ice extends far out over the ocean.

Antarctica is also home to Lake Vostok, one of the world's largest lakes. Lake Vostok is roughly the size of North America's Lake Ontario, but it is not a lake for sailing boats. It lies 2 miles (4 kilometers) below the continental ice sheet. Its waters have been sealed from air and light under the tremendous pressure of the continental ice sheet for perhaps as long as 35 million years. 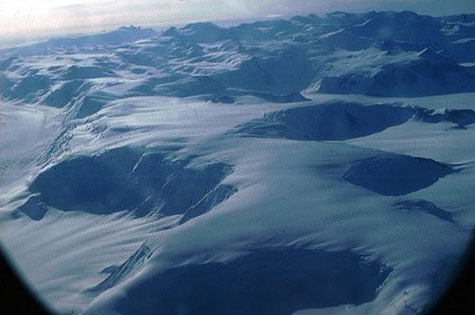