Each day I stand outside, look over the water and think to myself: Wow, I am so grateful to be part of this expedition—and isn’t it crazy to know that there is a big active volcano beneath my feet? Yes, it is. It is even more than that. It is so fascinating!

But first, I should introduce myself. I am Vanessa Schenker and I have wanted to become a volcanologist since I was 5 years old when I was in the library with my mum and chose a book about volcanoes off the shelf. On the last page was a picture of a volcanologist in his silver suit taking samples from a lava flow. I was so fascinated and from this moment on, I knew I would become a volcanologist. 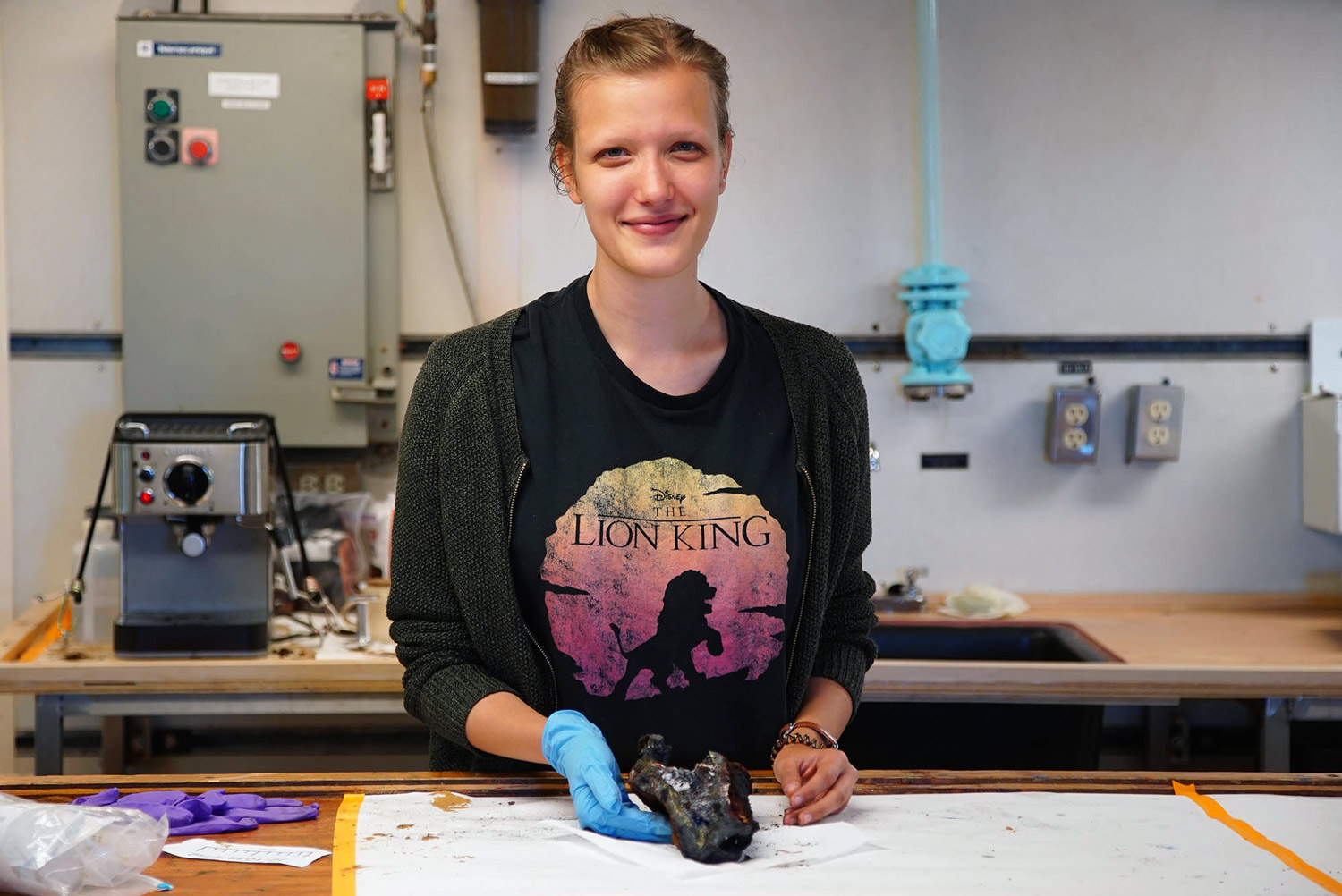 Vanessa Schenker with a hydrothermal vent chimney sample in the lab on board R/V Thomas G. Thompson. (Photo by Erik Olsen)

My passions never changed. I have now travelled to many volcanoes around the world. I’ve been to Yellowstone in the U.S., Stromboli in Italy, Erta Ale in Ethiopia, and many more. And whenever I visit a volcano I feel very impressed by what’s before me. Each volcano is unique. Every one of them offers something new to learn.

When I was younger I made a list of my favorite volcanoes. One of them was Yellowstone. Before I started studying earth science in Zurich, I had the chance to visit Yellowstone and, honestly, it was one of the greatest experience in my entire life. 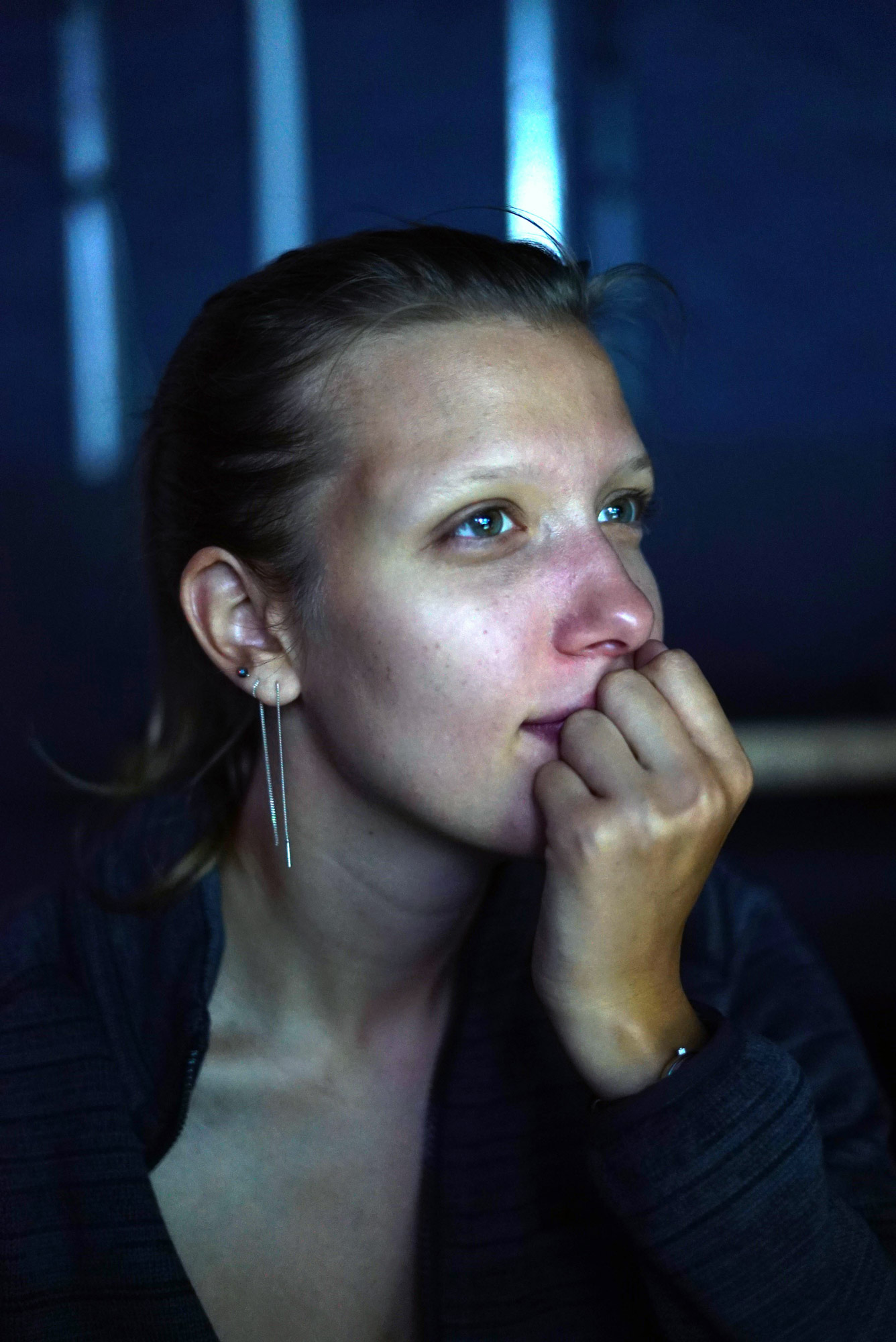 Schenker watches as ROV Jason traverses the seafloor to reveal a new volcanic landscape to her. (Photo by Erik Olsen)

Everywhere you go in the region, you see volcanic activity. There are richly colored ponds, fantastic geysers, and gurgling mud pools. Yellowstone is also special because the last eruptions there were classified as super-eruptions, in which exceptionally large volumes of volcanic material are expelled in a short time. If you look at geologic maps, you can see the impressive size of the caldera (55 by 72 kilometers or 34 by 45 miles) that was formed during the last giant eruption.

I studied earth science at ETH in Zurich and did my bachelor’s and master’s degree theses in volcanology and worked on volcanoes in Germany and Greece. For my research, I used minerals in volcanic rocks to gain insights into the magma chambers beneath the volcanoes. It is so impressive to see what minerals in volcanic rocks tell you about the formation of volcanoes. I focused on volatiles like water in magma chambers. This is crucial to investigate because different water concentrations can change the behavior of a volcano. We used a mineral called apatite because it changes its chemical composition depending on how much water is in the magma. And indeed, we saw differences in water content between more violent explosive eruptions and less violent effusive eruptions.

I finished my studies last September and remain committed to studying volcanoes for my career. My hope is to visit many volcanoes over my lifetime. There are so many, including thousands of underwater volcanoes like Brothers.

Hopefully, soon I’ll be going to visit the Tolbachik volcano in Kamchatka, which I have read about a lot. It is one of my favorite volcanoes on Earth because the mountain Tolbachik, with its two peaks, is a combination of two volcano types simultaneously. The lower peak belongs to a shield volcano, whereas the higher peak is part of a stratovolcano (sounds weird, right?). I really would like to see and study the differences between the two volcanic types.

So here I am on this cruise with the opportunity to better understand the Brothers volcano. During several of its planned dives, Jason is going to bring up rocks I can study. I hope to investigate how Brothers volcano has formed and also what factors trigger an eruption there.

Although I will never walk around on Brothers, I still hope to find out how the volcano was formed. Which is pretty fantastic. We’re just halfway through our trip now, and there are so many exciting things to come. 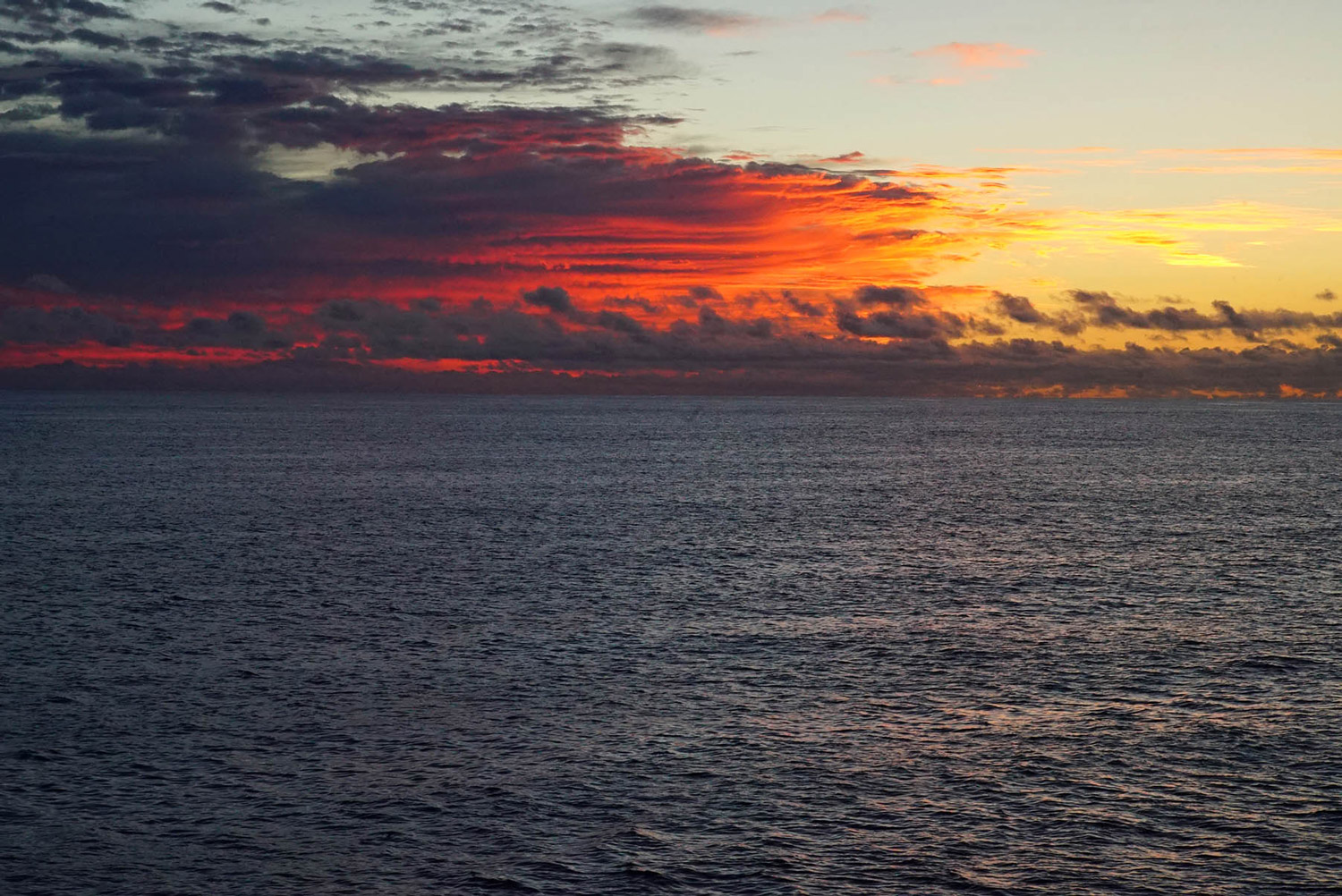 Hard to believe there is a volcano just beneath the surface. (Photo by Erik Olsen)