In school, we learn about the carbon cycle–typically within the context of forests. Through photosynthesis, trees absorb carbon dioxide and produce oxygen, and when their leaves fall to the ground, they decompose and absorb into soil. Some of the carbon in those leaves now “sinks” into the ground.

The ocean also removes a massive amount of carbon dioxide from the atmosphere–and understanding that process is the fundamental motive of this Dive & Discover expedition. 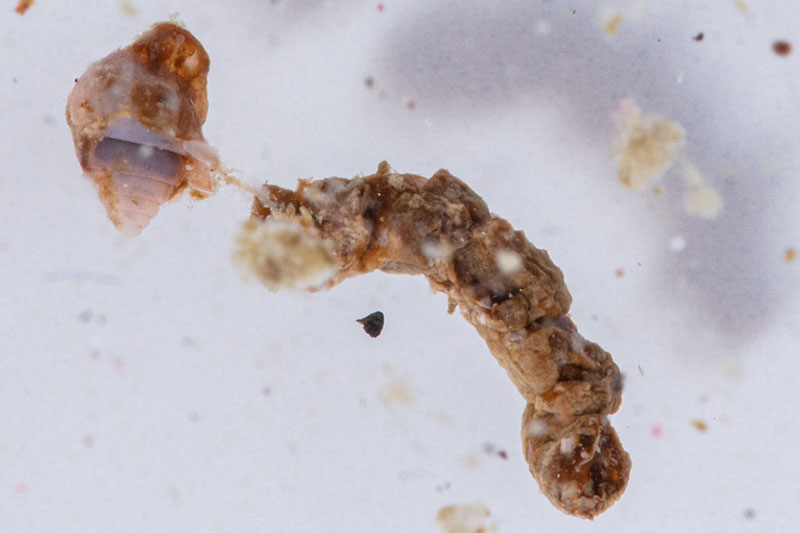 A sample collected from TZEx includes a rare, intact fecal pellet, most likely from a fish. A pellet like this would likely sink very quickly, carrying carbon with it. Photo by David Liittschwager.

According to NASA, the ocean contains about 50 times more dissolved carbon dioxide than the atmosphere. Just like trees on land, marine plants (phytoplankton) convert carbon dioxide into organic matter through photosynthesis. That organic matter provides the base of the marine food chain. As animals eat it, they produce fecal pellets (aka poop), which sink down and sometimes attach to other particles. Oceanographers call this endlessly falling, carbon-rich matter “marine snow.”

“We are out here to capture the marine snowfall, to better understand its variation, and predict how it will change in the future,” says co-lead scientist Ken Buesseler.

During this expedition, we’re taking a closer look at how marine snow carries carbon to the deep ocean with a variety of specialized instruments. Scientists either collect marine snow directly, with sediment traps like TZEx, or they take pictures of marine snow and other particles using MINIONs, the StingRay, the Underwater Vision Profiler (UVP), and the Imaging FlowCytobot (IFCB).  From these images, researchers can infer how many particles there are, how much carbon they contain, and how fast they’re traveling. 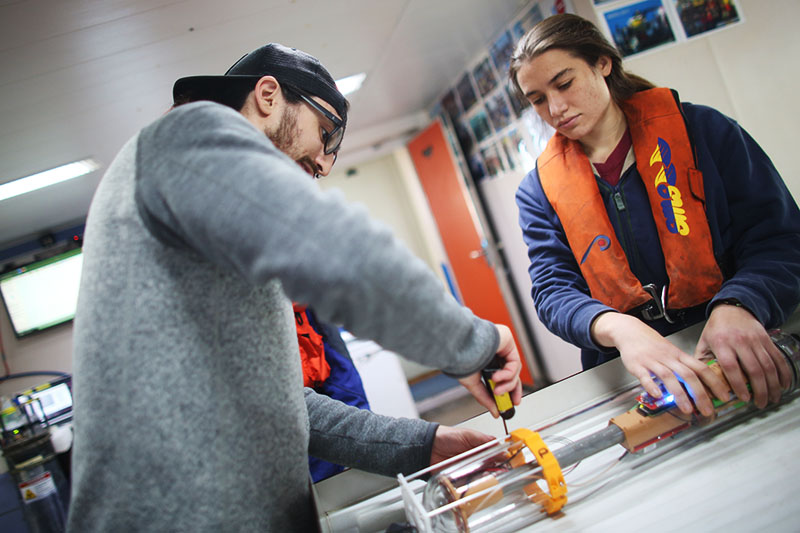 The speed at which particles fall through the water makes a big difference.

In some areas of the North Atlantic, storms are strong enough to stir up waters several hundred meters deep, bringing this carbon-rich marine snow back to the surface. Understanding how much and how deep carbon moves in different parts of the ocean is critical for building accurate climate models.

“If we could engineer a giant diatom bloom, we could remove more carbon,” Ken says. “That would potentially make the ocean a larger carbon sink.” 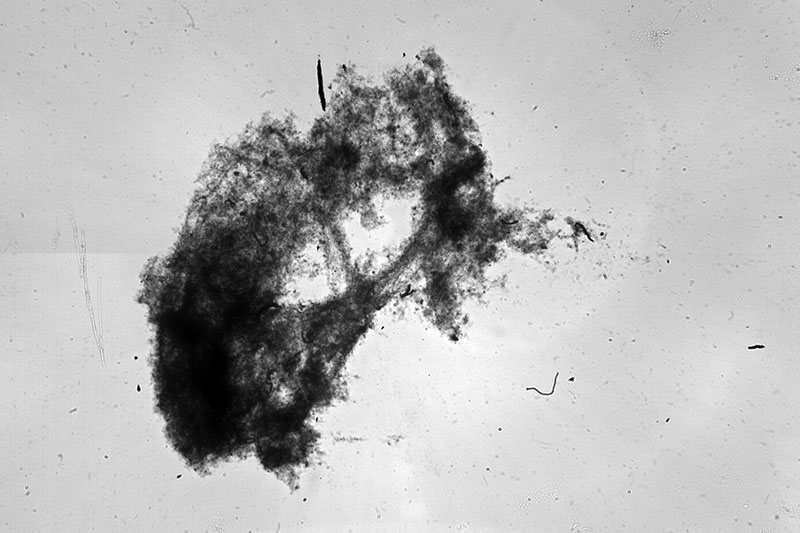 Some agencies advocate for harnessing the ocean’s natural carbon cycle to lower atmospheric CO² levels. We know that humans are already impacting the ocean, and history shows that we should be cautious about manipulating the power of Mother Nature. Could giant, man-made carbon sinks potentially harm fisheries? Could it affect sea level rise? Could it create more low-oxygen dead zones in the ocean? Would it even work, and what are all the consequences of using the ocean to remove carbon dioxide?

“If we could get carbon out of the atmosphere and into the deep ocean, would it slow down the rate of climate change?” Ken asks. “Or are we going to create more problems?”

The research taking place on this expedition will help us understand what’s currently happening in our oceans, and inform vital decision-making in the future. 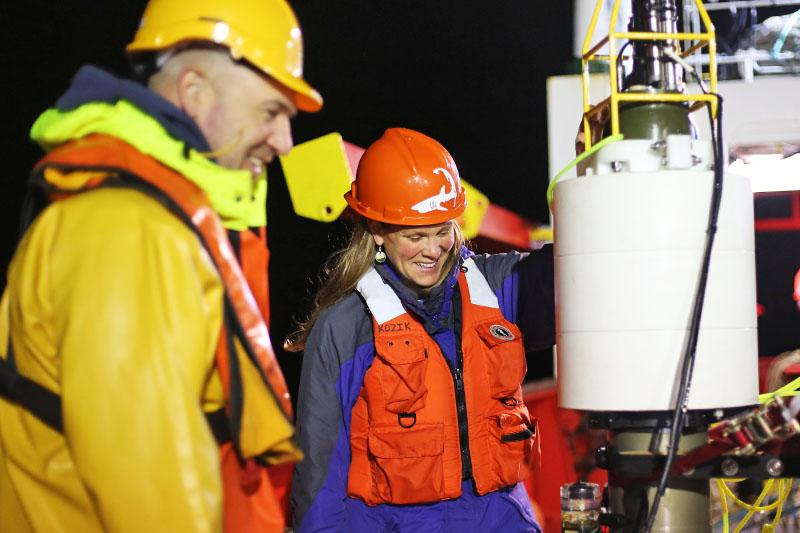 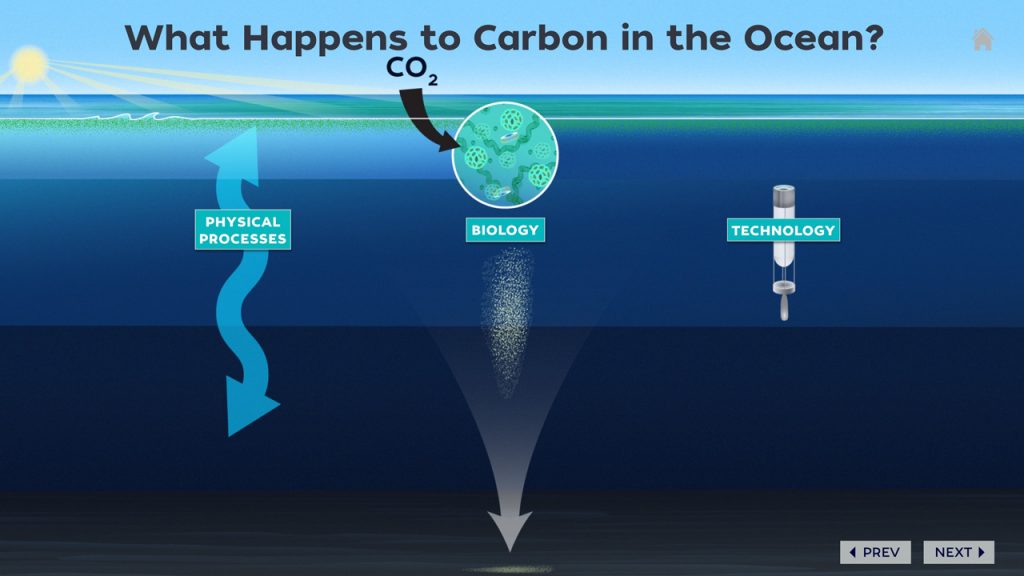 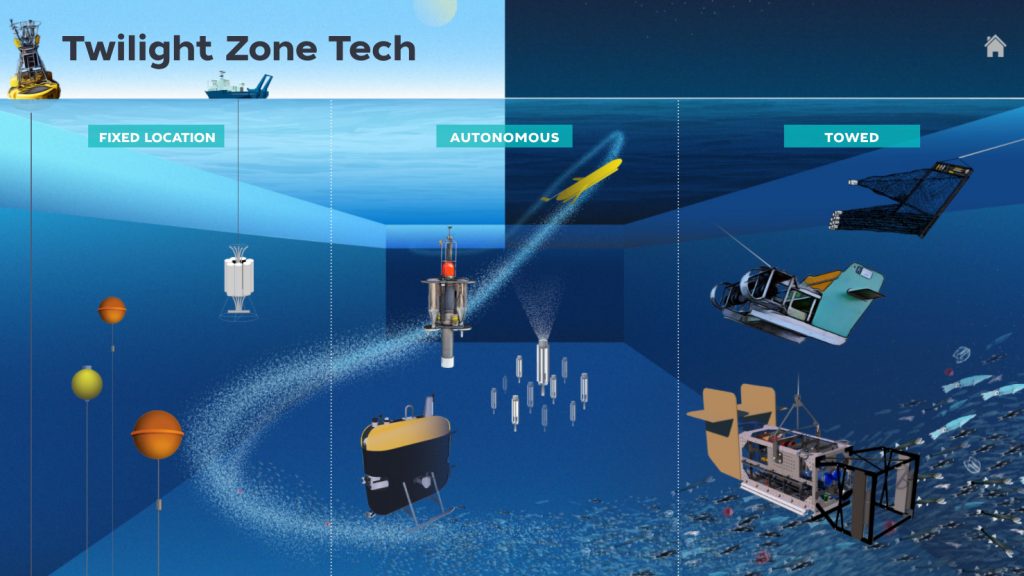