Traditional nets that scientists use to collect fish and other ocean life collect everything from the surface where the net enters the water down to the depths and back. If your goal is to understand what animals live at a specific depth, you need something different. MOCNESS (Multiple Opening/Closing Environmental Sensing System) is a high-tech version of the humble sampling net that tows behind a research ship. It is actually a net system that has several separate nets researchers can open and shut independently so that it samples only at specific depths.

MOCNESS also has several sensors that transmit data about conditions in the water to the surface in real-time through the heavy trawl wire connecting it to the ship. Data from MOCNESS and from acoustic instruments on the ship help researchers to decide where to sample and to match those samples with conditions below the surface at the time samples were collected. MOCNESS can sample as deep as 6,000 meters (3.7 miles) and sensors report conductivity (which translates to salinity or how salty the water is), temperature, depth, chlorophyll (which tells how much phytoplankton is in the water), oxygen, and light levels.

MOCNESS nets are made of fine mesh with holes as small as 64 micrometers (0.003 inch) to catch even microscopic plankton, or up to 3 mm (0.12 inch) to catch mostly larger organisms. The size of the MOCNESS opening, the time a net is open, as well as the conditions underwater when a net was open allow researchers to calculate how much lives in the twilight zone and the conditions they prefer. 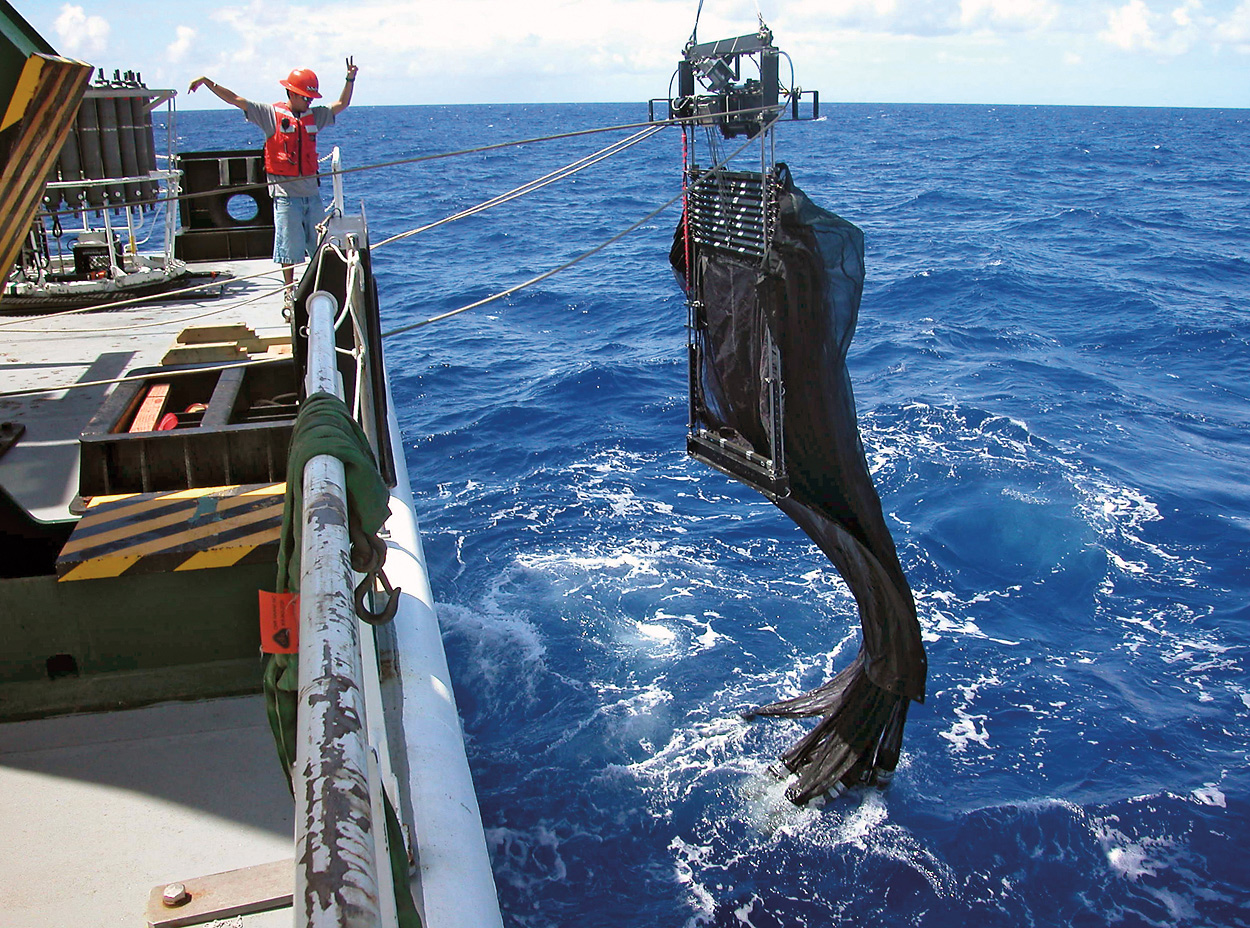 Stingray is a small towed “sled” packed with instruments, one of which is the ISIIS (In-situ Ichthyoplankton Imaging System) camera system. The images captured by ISIIS are known as shadowgraphs and they might look simple, but they are incredibly detailed and they allow scientists to identify some of the smallest animals living in the twilight zone, often to the level of their species. Shadowgraph images are particularly important to identify and understand gelatinous animals like salps and siphonophores because these animals are fragile and difficult to collect using a net. Much of what we know about the twilight zone is based on net tows and may seriously underestimate these fragile creatures. ISIIS is helping us fill that gap.

These tiny, fragile organisms form an important part of the ocean’s food web and even play a role in the planetary climate system by helping move carbon from surface waters into the deep ocean. In spite of their importance, however, communities of marine plankton are not well understood—in part because the ocean is vast, and plankton communities vary widely by location and over time.

ISIIS takes 14 shadowgraph images per second as it is towed behind a ship, producing a huge amount of data on the natural distribution of miniscule creatures in the twilight zone. Stingray also carries instruments to measure light, oxygen, and chlorophyll (which tells us about phytoplankton), as well as an acoustic sensor that measures the abundance of animals in the twilight zone. Data collected by Stingray will help scientists understand the twilight zone ecosystem and the ocean as a whole. 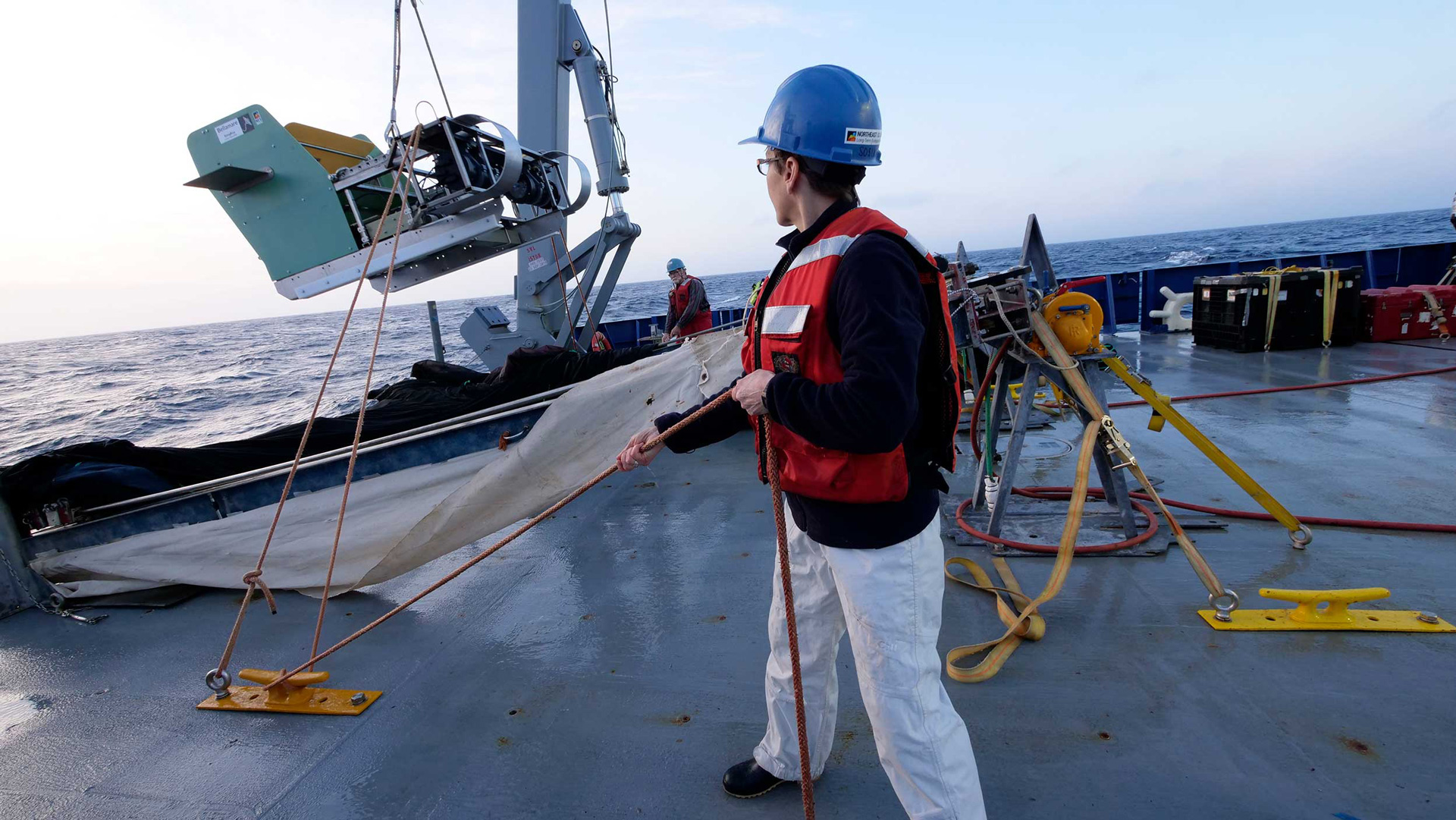 Not every instrument that scientists use to learn about the twilight zone is ultra-high-tech or expensive. The MINION is specially designed to be small and inexpensive. It is about the size of a 2-liter bottle and is equipped with simple cameras, seawater sensors, acoustic recorder, and a ballast weight. Once deployed, MINION will sink to the twilight zone and drift with currents.

Cameras record particles falling through the ocean that land on MINION’s n a clear glass panel on top of the instrument. This allows scientists to measure the amount, size and type of particles drifting down and to estimate how much carbon moves through the twilight zone and where it is coming from.

A MINION is also designed to listen for underwater sound sources that help it determine its location as it drifts using a simple method known as triangulation. After a MINION has finished its mission, it will release a small weight and float to the surface. At the surface, it sends a homing signal to a satellite so it can relay data and be recovered.

Detailed measurements of carbon moving through the twilight zone allow scientists to learn more about exactly how the twilight zone helps regulate Earth’s climate. In order to make these measurements, engineers have designed a new underwater instrument called the Twilight Zone Explorer, or TZEx.

TZEx is built on a profiling float, a type of submersible instrument that can rise and sink to specific depths in the water by inflating and deflating an onboard oil bladder. It can sink into deep water, stay there for a fixed time to collect sinking particles  and make measurements, and then rise back up again. 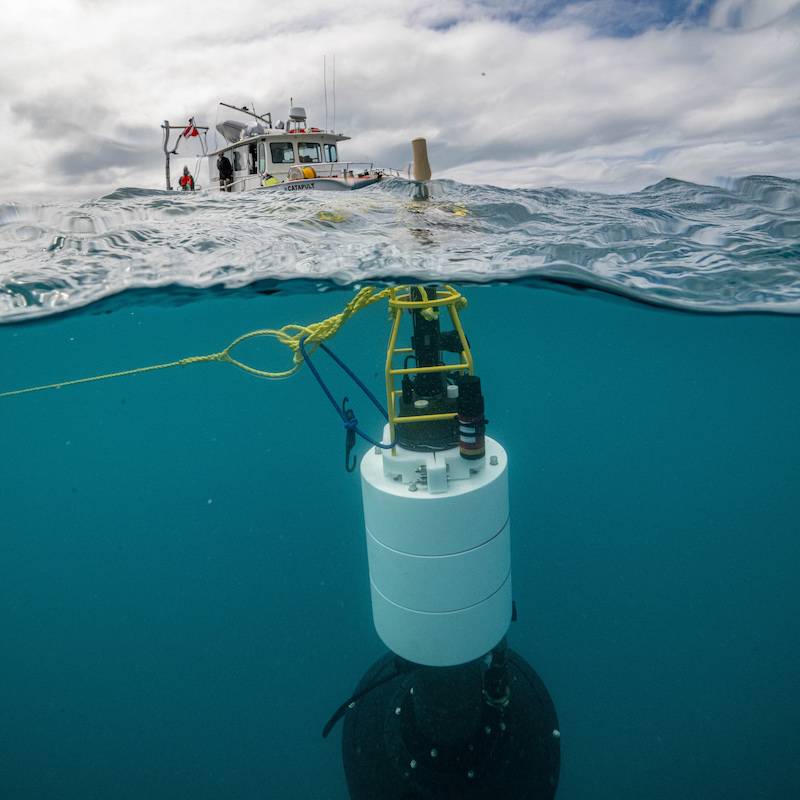 Gliders are winged, low-power autonomous underwater vehicles that generate forward thrust by changing their buoyancy and glide angle to repeatedly dive and surface through the water. They can carry a variety of sensors, and are often used to carry out missions up to six months long. Gliders are used to take vertical profiles of data, giving scientists a clearer understanding of how things like temperature, salinity, and turbidity of specific areas of the oceans change over time in order to gain a better understanding of the role the ocean plays in processes like global climate.

We won’t be deploying any gliders on this mission, but a team from the National Oceanography Centre in the U.K. deployed three earlier in the spring (two Seagliders and one Slocum glider) in the region around the mooring at the Porcupine Abyssal Plain Sustained Observatory. These vehicles have been mapping the surface ocean since then and sending their data back to shore so that the teams on the ships can find features known as eddies to track with their instruments. 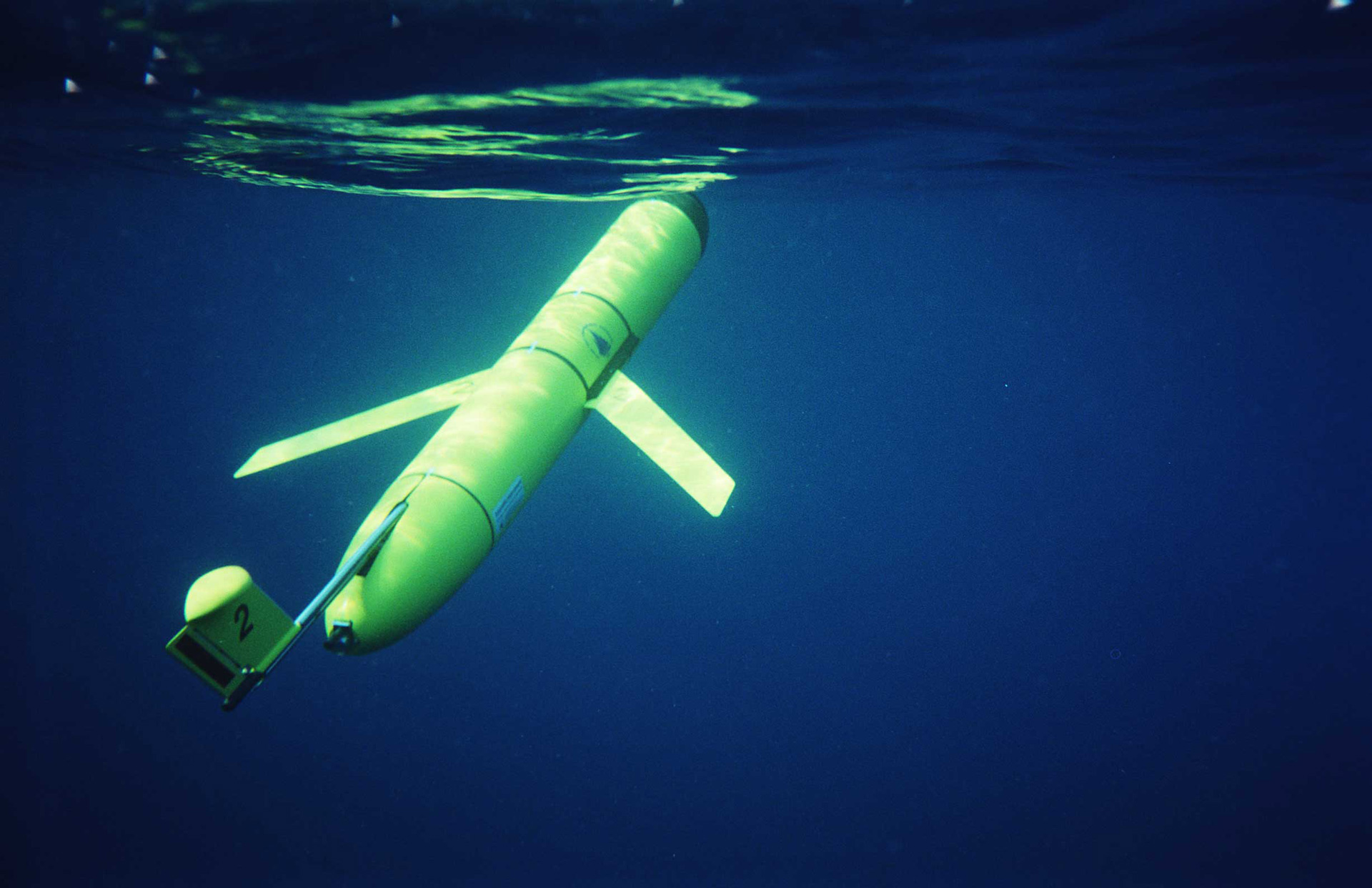 CTD stands for conductivity, temperature and depth, three basic properties of seawater that many scientists measure. For our purposes, the CTD is a shipboard instrument made up of two dozen or more sampling containers known as Niskin bottles attached to a large metal frame, and often with several other instruments attached (one of which is an actual CTD sensor).

The frame is lowered on a cable, and scientists can watch the properties of the water change as the CTD descends and can then remotely close one or more of the bottles at specific depths on the way back to the surface. Small, low-powered CTD sensors are used on autonomous instruments like gliders, ISIIS, and MOCNESS. 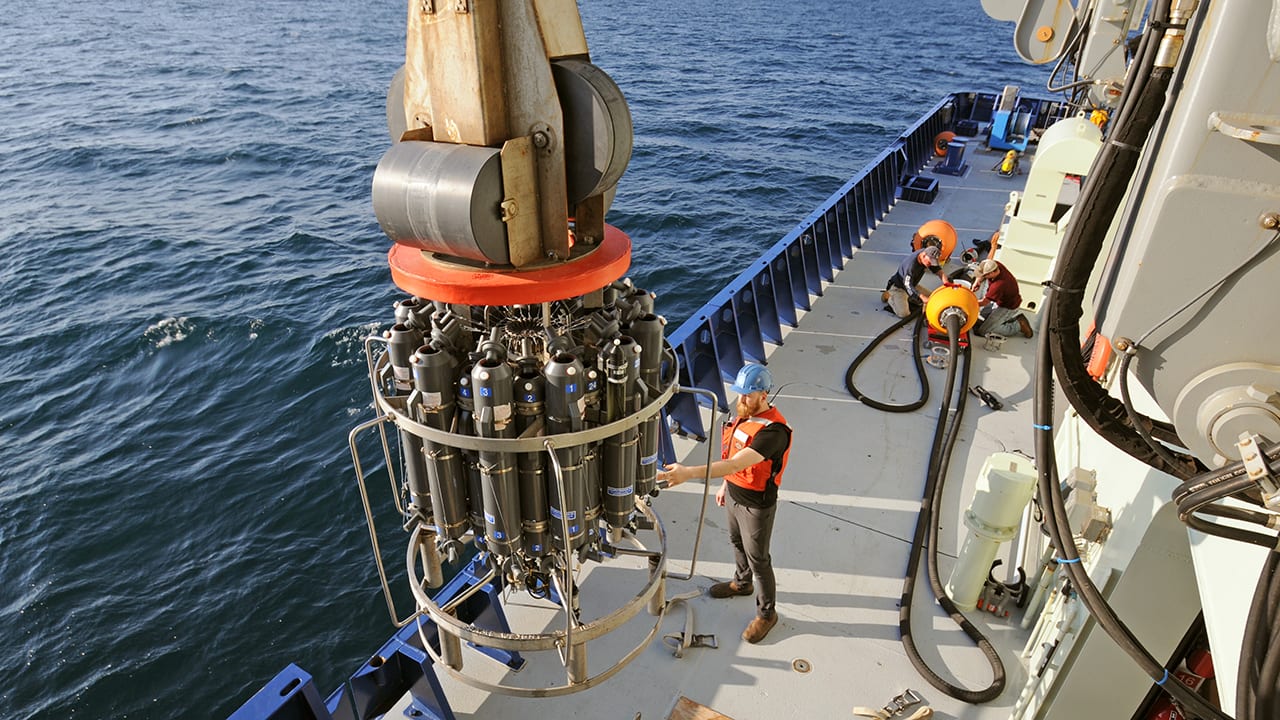 A CTD rosette, shown here, is a mainstay of oceanographic research. CTD stands for conductivity (which provides a measure of salinity), temperature, and depth. Photo by Véronique LaCapra, ©Woods Hole Oceanographic Institution

Light doesn’t travel very far in seawater, but sound does. For that reason scientists often use different types of acoustic sensors known as sonars to “look” through the ocean and see what’s there. The most basic instrument is an echo sounder, which sends a single “ping” straight down from the bottom of a ship and measures the time it takes for the echo to return. This allows a computer to calculate the depth beneath the ship.

Fish finders are also a kind of sonar that detects the echoes from the bodies of animals in the water. A very sophisticated kind of fish finder, known as a wide-band echo-sounder, uses lots of frequencies of sound simultaneously to create a picture of schools of small animals swimming beneath the ship. But shipboard sonars are often far from these tiny, soft-bodied animals, making it difficult to tell one type of animal from another. That’s why we also put acoustic sensors onto things like Stingray and put them directly into the twilight zone, so we can get an even more accurate picture of what’s there.

The Underwater Vision Profiler (UVP) is an imaging sensor. It was developed by the Laboratoire d’Oceanographie de Villefranche sur mer, France, to study large particles and zooplankton as deep as 6,000 meters (19,685 feet). Thanks to its smart camera and a dedicated red light flash system, the instrument counts and measures particles above 100µm and saves images of targets above 0.7mm.

The UVP5 is a decade-old instrument that has performed more than 10,000 profiles in all the world's oceans. It will be deployed in the CTD-rosette frame during the Export experiments.

The new UVP6 is more versatile, much smaller and powerful. It was recently deployed on such diverse platforms as remotely operated vehicles (ROVs), gliders, profiling floats, long- and short-term moorings and CTDs. During this expedition, two UVP units will be utilized on drifting moorings and a profiling float equipped with sediment traps (the TZEX). 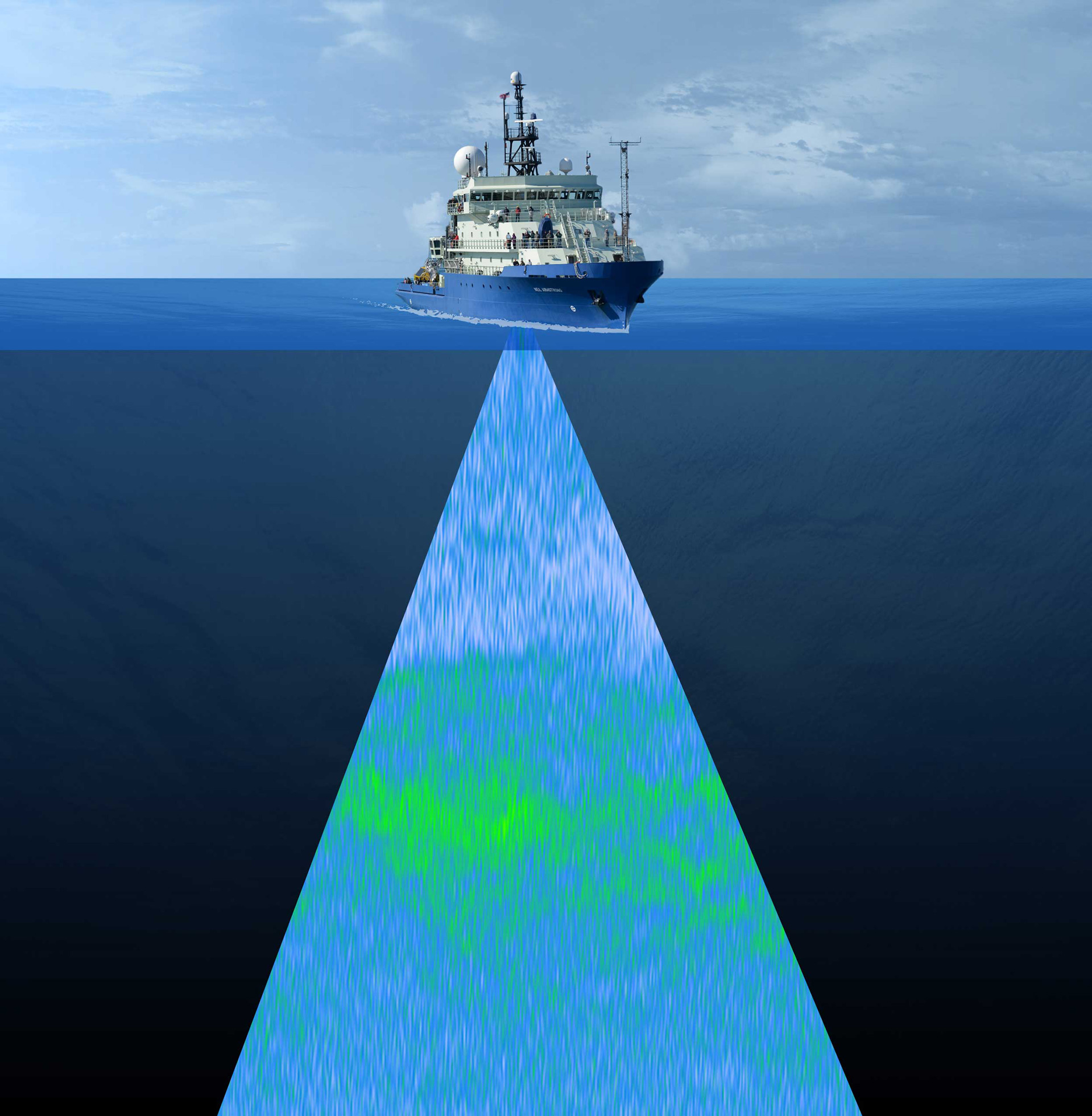 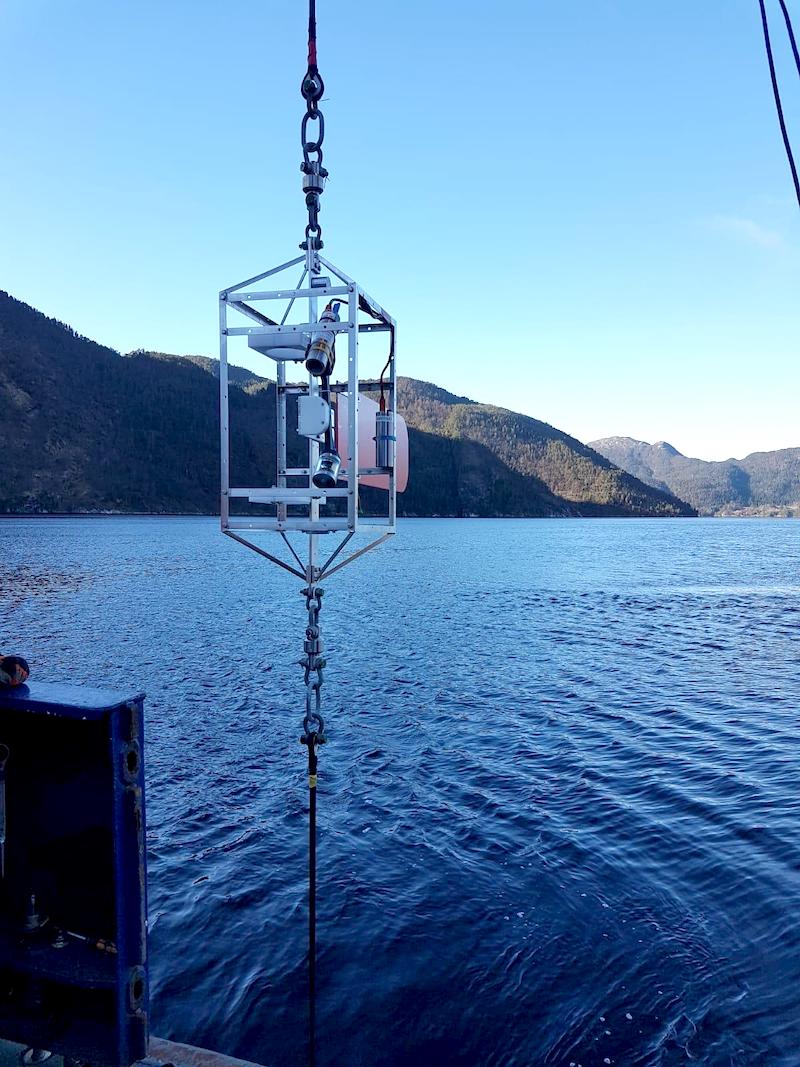