For this Dive and Discover, instead of making a beeline for the bottom, researchers on our 17th expedition will look more closely at the middle of the ocean, also known as the mesopelagic or the ocean’s twilight zone.

The twilight zone is a vast part of the ocean roughly one-half mile thick that circles the globe. Unlike the seafloor, it is seemingly featureless (at least to humans). It is also cold, dark, and pressure-filled, making it difficult to explore. It would also seem to be a hard place for anything to live, yet we now know that life thrives there, thanks to the many amazing and sometimes alien-looking characteristics animals have evolved to survive.

Many of these animals join a daily migration to the surface each night to feed under the cover of darkness, and back down again to hide during the day. This daily vertical migration is the largest animal migration on Earth—and it happens every day all around the world. The  animals that live in the ocean twilight zone help feed larger animals at the surface, like whales, sharks and tuna. Some large surface predators are strong enough to dive deep into the twilight zone to feed, and they seem to know where in the depths the hunting will be best.

We are also realizing that the twilight zone affects us on land every day. Carbon dioxide is a greenhouse gas that warms the planet. Some of that carbon dioxide dissolves into the surface ocean, where tiny plants known as phytoplankton that use sunlight and carbon dioxide to create the carbohydrates (sugars and other materials) to build their cells and run their metabolism. This is known as photosynthesis, the same thing that plants on land do when the sun is shining.

These phytoplankton become food for migrating animals from the twilight zone. And the things that eat algae become food for larger creatures, and so on up to the biggest predators in the ocean, including us, to create the ocean’s food web. The remains of all those animals, many in the form of poop, sinks through the ocean with the help of animals in the twilight zone into the deep ocean. Once there, it can remain locked away for long periods of time. This is known as the ocean’s biological carbon pump and it will be a focus of our trip.

Members of WHOI’s Ocean Twilight Zone team will be sailing on a Spanish research vessel, the Sarmiento de Gamboa, out of Vigo, Spain, May 3 to 21. Our ship will be joining two others that are part of the NASA-funded EXPORTS mission, which focuses on what happens in the surface ocean to help move carbon from the atmosphere down to the twilight zone.

Scientists on the Sarmiento de Gamboa will be deploying large nets that can be opened and closed at specific depths (MOCNESS); a towed vehicle carrying both a special imaging system to take pictures of individual animals (Stingray) and an acoustic system to measure the abundance of life in the twilight zone; small imaging robots that measure sinking particles full of carbon (MINIONS); a larger underwater float to capture and take microscopic images of marine snow particles (TZEX); and several more biological, chemical and physical sensors.

The team will be collecting fish and other animals that will allow them to better understand the relationship between what lives in the twilight zone and the movement of carbon from the surface to the deep ocean. Along the way, you’ll get to see what happens when the scientists and crew retrieve their nets from the ocean and see up close some of the fantastic creatures that share the planet with us.

The expedition is also an excellent opportunity to test new technology developed by scientists and engineers to study a hard-to-reach place like the twilight zone. You’ll get to see how instruments like MINIONs, TZEx, and sonar bring back data that teach us even more about the ocean and how it helps make our planet livable.

You’ll also get to meet the science team and the ship’s crew on the research vessel Sarmiento de Gamboa, as well as the two other ships joining us—the Discovery and the James Cook from the National Oceanography Centre in the U.K. Our two chief scientists for the expedition are Ken Buesseler, an ocean chemist and at WHOI, and Heidi Sosik, a plankton biologist and the science lead of the Ocean Twilight Zone project at WHOI.

So get your sea legs ready and join us when we shove off May 3 for the wilds of the Northeast Atlantic and the ocean’s amazing twilight zone. 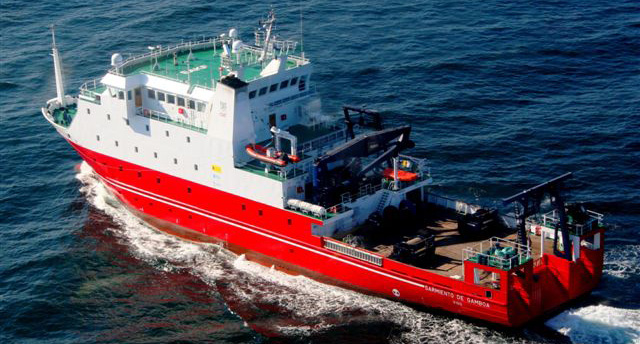 Map showing the location of Expedition 17: Into the Twilight Zone