Join us for mission 16, as we take an adventure to one of the world’s strangest underwater volcanoes.

You will be a part of our 20-day expedition as we venture into Brothers volcano, an underwater caldera that is part of the Kermadec volcanic arc system off the Northern coast of New Zealand. This is the most hydrothermally active undersea volcano system on Earth and it harbors some of the most extreme environments on earth.

At Brothers volcano, we will be studying how an undersea volcano releases heat, chemicals, and metals into the ocean and how they affect the life around it. The plan is to study the geology, biology, chemistry, and geophysics of this volcanic system using the remotely operated vehicle (ROV) Jason. Jason and its partner vehicle Medea will carry several high-definition cameras, including one ultra-high-definition (4K) camera, plus an array of sensors and samplers up close to the rim and down onto the floor of the caldera.

The expedition to Brothers volcano is all about how these remarkable, yet poorly understood, features work. Volcanoes like Brothers form where two of the Earth’s tectonic plates, in this case the Pacific Plate and the Australian Plate, are colliding.

When two of these massive plates crash together, the older and denser of the two plunges beneath the other in a process called subduction. This creates tectonically active regions where earthquakes are common and where a string of volcanoes known as an intraoceanic arc system forms. In the ocean, these volcanoes sometimes rise high enough to form islands in an island arc, such as Alaska’s Aleutian Islands or the Lesser Antilles in the Caribbean.

Cracks in the young lava that makes up the volcano allow seawater to circulate deep into the Earth’s crust. There, heat from an underlying magma chamber or hot rock, plus chemical reactions between the seawater and rocks that form the crust, create hot springs that vent mineral-laden fluids from the seafloor. That fluid can hold important clues about the formation and evolution of our planet and about life itself. Part of our mission will be to sample the hot fluids coming out of hydrothermal vents to see how much metal and various other chemicals are in them.

The expedition will feature several dives by Jason to film, sample, and map four hydrothermal vent fields we know are down there. We’ll also do extensive filming of the vents in action, some of it in ultra-high definition (4K) video that we will post on the Dive and Discover website!

Among oceanic arc volcanoes, Brothers is unique. It is known as a submarine caldera volcano, or a volcano that has collapsed into itself, forming a large, ring-shaped crater which averages 1,850 meters (6,000 feet) deep. It also has a dome in the middle that rises more than 350 meters (1,000 feet) above the caldera floor and features two very different types of hot springs, each of which will tell us something unique about the volcano’s inner workings. Very few other volcanoes on the seafloor provide such an opportunity to see multiple vent systems in action at the same place. To geologists and microbiologists, it is a goldmine.

Read on, because we mean this literally.

One type of vent we’ll explore is the so-called black-smoker vents, which are towering chimney spires up to 20 meters (60 feet) tall that spew hot, black fluid that looks like smoke. The fluid coming out of these vents can be more than 310°C (590°F), which is why the Jason pilots have to be careful getting too close to them. The fluids are rich in iron, copper and zinc sulfides that precipitate and form the towers themselves, as well as the black particles in the “smoke.” They also contain gold.

The other type of hot spring at Brothers volcano looks like small mounds up to 1 meter (3 feet) high and are made up mainly of sulfur. These are cooler because the hydrothermal fluid has already mixed with cold seawater. But they are very different because the fluid is far more gassy and acidic at these sites—more acidic than acid in a car battery, in fact.

Amazingly, these vents often harbor a vast array of life. So far, around 50 species of animals, including shrimp, crabs, worms, and various species of fish have been identified at Brothers volcano. Some of the marine life, such as the bacteria inside tubeworms, use the hydrothermal fluids as an energy source. Because both hot springs systems are so different, we expect to find very different kinds of microbial life, and the larger animals they help support, at each one.

Life around deep-sea volcanoes is tough. The heat near the vents and the pressures at the depths Jason is diving to are immense. Scientists used to think that little life existed so deep, but now we know that there are many creatures that seem to love these extreme environments (which is why we call them extremophiles!). Many types of microbes live at the site, and we will likely discover some that have never been recorded by science before.

This expedition will help us better understand the evolution of underwater volcanic systems and the life that thrives around them. It is also setting the stage for an ambitious effort in May to actually drill deep into Brothers volcano to gather long rocky “core samples” that will help us better understand how undersea volcanoes work, especially those with unique vent systems like we find at Brothers.

Another key question we hope to answer is how metals within the hot springs get transported to the seafloor and ultimately form metallic ore. Metals like copper, zinc and gold precipitate out of the fluid forming massive sulfide deposits. These metals are ones we need to make smart phones and other modern technologies.

The cruise is a multi-disciplinary, multi-national expedition led by scientists from the U.S. and New Zealand. Dr. Anna-Louise Reysenbach, the Chief Scientist on the cruise, is a professor of biology at Portland State University, Oregon. She is a world authority on life in extreme environments and has done numerous dives in the submersible Alvin to other parts of the seafloor. Dr. Cornel de Ronde is a Research Geologist with GNS Science in New Zealand. He has visited Brothers volcano eleven times and with his team, did much of the initial work mapping and understanding how the hydrothermal system works. Dr. Maurice Tivey from Woods Hole Oceanographic Institution and Dr. Caratori Tontini from GNS Science will be measuring heat flow through the caldera floor.

All of this makes for a very ambitious and exciting plan for science and exploration and you will have a front-row seat through Dive and Discover to watch what we do and to learn more about the planet we call home. 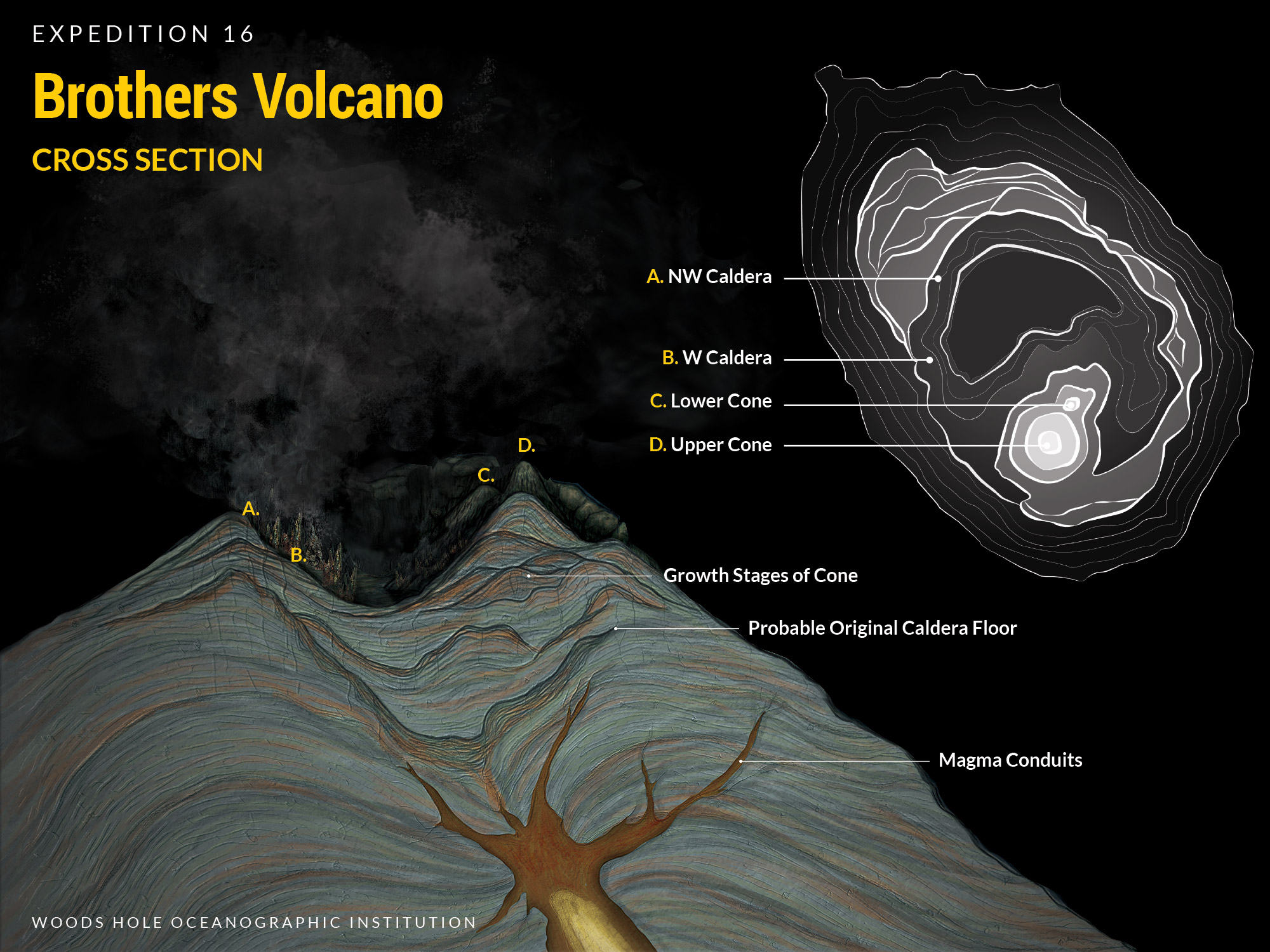 What makes the Brothers Volcano unique? Click to enlarge. 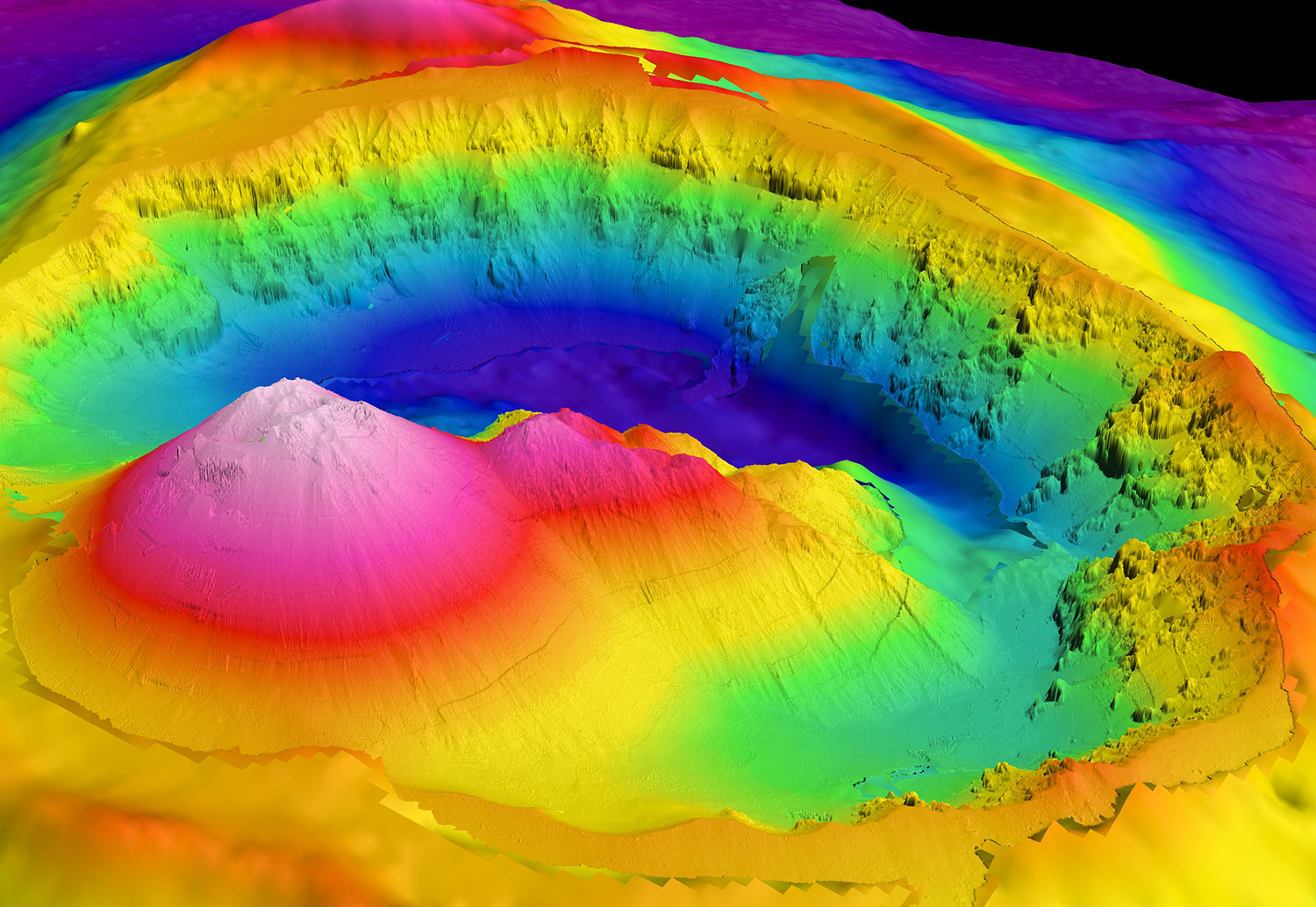 Bathymetry image of Brothers Seamount and caldera, an undersea volcano about 3 kilometers in diameter off the coast of New Zealand, and host to the most active and possibly largest of any hydrothermal vent fields discovered to date along the Kermadec Arc. Woods Hole Oceanographic Institution's autonomous underwater vehicle ABE acquired high-resolution (2-meter) bathymetry data inside the caldera. Surface ships mapped the lower-resolution (25- to 30-meter) bathymetry data on the surrounding volcano flanks. This feature was formally named using tools provided by the General Bathymetric Chart of the Oceans (GEBCO). Still image credit: S.G. Merle (GNS Science/WHOI/NOAA/PMEL/OSU) (Movie courtesy of the NOAA Vents Program) 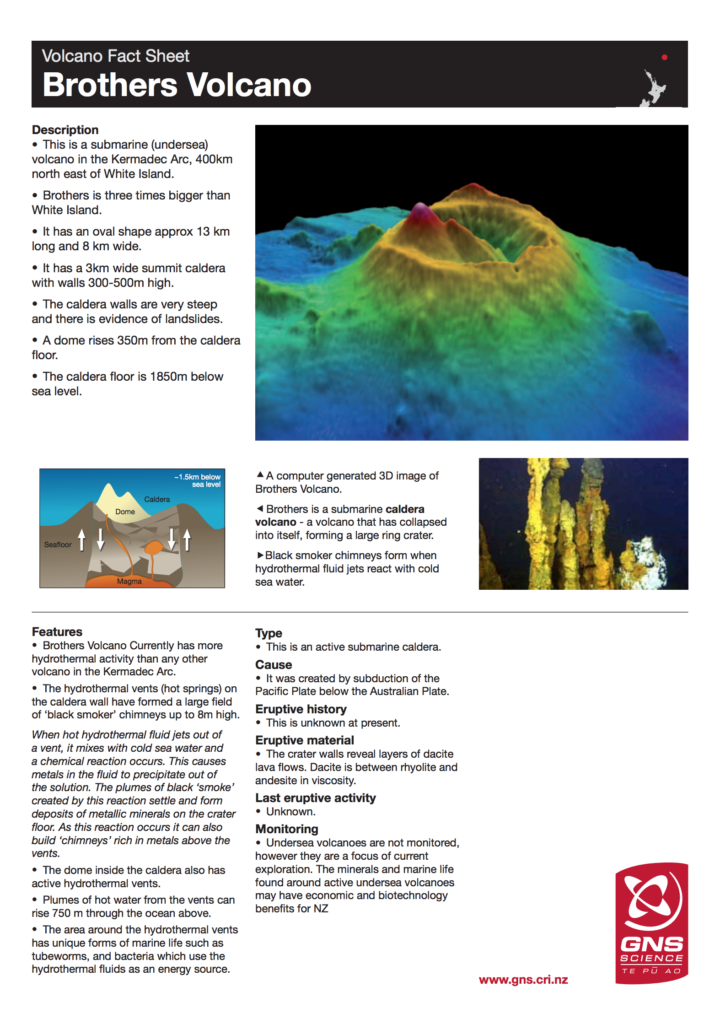