Temperature is essential to understanding hydrothermal vent systems. Biologists use it to learn about the animals living environments and the range of temperatures an animal can tolerate. Chemists use it to make sure they are collecting the hottest fluid from a vent as well as to explain the vents chemical composition.

Measuring temperature at hydrothermal vents became easier about five years ago.Thats when Dr. Albert Bradley of the Woods Hole Oceanographic InstitutionsApplied Ocean Physics and Engineering Department devised a method to get data into and out of an instrument in the deep ocean without a cable.

Scientists who study hydrothermal vents were enthusiastic about Al's invention.Before, the sensor had to be directly connected to the submerged vehicle -- eitherJason or Alvin -- with an electrical cable to send the data. But cable scan tangle in a manipulator, they corrode in seawater quickly and they require a lot of maintenance.

To create an inexpensive and easy-to-use sensor, Al combined some basic high school principles of physics with electronics.

Heres how it works. When alternating current -- AC current is like the electricity that is found in household outlets in the US -- flows through a coi lof wire, it creates an alternating magnetic field around it. If you introduce a second coil into that magnetic field, an electric current will start to flow, or be induced, in it.

If the coils are close enough, about one quarter of the diameter of the coil, the induced signal is strong enough to receive information being sent by the other coil. Each coil can both transmit and receive but, like people talking politely, only one talks at a time. Its exactly like an old fashioned Morse code conversation with radios or flags, except that we now use computers.

How do scientists use this invention to measure temperatures of vents from Jason? They use a coil on the manipulator that can talk to a matching coil on the T-probes. Jason has both a stand-alone T-probe, and T-probes wrapped along the intake nozzles of each hydrothermal fluid sample bottle. When Jason picks up one of these in its manipulator, the coils automatically come together. Then they start to talk to each other.

The temperature data are sent from Jason through the long fiber optic cable that connects Jason and Medea to Knorrs' control van. As the data come in and are recorded on a computer, scientists monitor the temperature that theICL T-probe is measuring during sampling operations.

Today, scientists routinely use Als invention on Jason and Alvin.Thanks to his ingenuity, measuring temperatures and taking hydrothermal vent fluid samples with Jason and Alvin are much easier and more accurate. 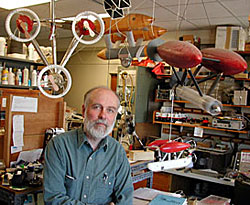 Al Bradley is surrounded by models of oceanographic instruments and vehicles that he invented. Photo by Dave Gray, WHOI. 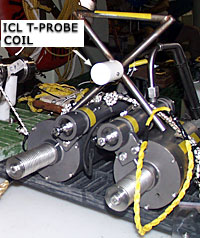 A pair of hydrothermal fluid sampling bottles equipped with an ICL T-probe. When Jason holds the handle, it can transmit data to another coil on the manipulator. 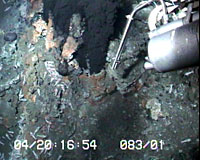 Jason moves a fluid sampling bottle into a black smoker. The T-probe is behind the intake nozzle.