By Francisco Cruz, Researcher at the Charles Darwin Research Station

One of the investigations complementing the geologic studies the scientists on board RV Revelle are carrying out, is a survey of the seabirds inhabiting the Galápagos. The main objective of my seabird study is to determine the number and variety of bird species found in the near shore environment of the western and southern islands: Fernandina, Isabela, Floreana and Española Islands.

The swallow-tailed gull and the resident red-billed tropicbird were close companions to the Revelle during the first days of my observations.

One of the most spectacular species encountered in this area is the waved albatross. One of the largest birds found in the Galápagos, this birds wingspan can exceed 3 meters (over 9 feet). The waved albatross usually nests in the southeastern portion of the archipelago in a place known as Punta Ceballos on Española Island.

Boobies offer a fascinating spectacle as they dive into the Pacific Ocean to fish for food. Its sometimes possible to observe hundreds of these birds fishing at once.

Frigate birds are also present on Isabela, sharing territory with the boobies. Male frigate birds have a red pouch, or gular sac, under their throat that they inflate during mating rituals. Frigate birds also have a very distinctive long, forked tail. These birds often chase the boobies and steal their food.

Often, at night, I have seen storm petrels flying beside the Revelle. These are small seabirds, similar in size to a swallow, and are known for their ability to fly during stormy weather. Their colonies are distributed around Isabela.

Two species of seabirds frequently observed on, or near, the sea surface are the Galápagos petrel and the Audubons shearwater. The petrel lives in the highlands of Isabela, Floreana, Santa Cruz, Santiago and San Cristobal Islands, whereas the shearwater is distributed throughout the archipelago.

Although I have not yet seen any Galápagos penguins and flightless cormorants on this trip, they are frequently found on Fernandina and Isabela Islands. 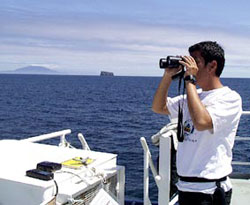 Since joining the Revelle at Puerto Ayora, Francisco has spent much of his time doing the seabird study from the fore deck.