Hydrothermal vents are often as big as three-story buildings. However, locating them in the ocean can be tricky. Before scientists can even begin studying the vents and the animals that live there, oceanographers like Bob Collier and Marvin Lilley must find them.

Collier says that searching for vents is a lot like sniffing out a good smell, like brownies cooking. First you catch the chocolate scent, then you walk closer to locate the exact source -- in the oven.

How do Collier and Lilley know where to begin sniffing for the vents? Vents are usually located on mid-ocean ridges where tectonic plates move apart and molten rock rises from the mantle to create new seafloor.

We look for heat and unique chemicals introduced by the vent into the cold, constant background of the deep ocean. The buoyant fluids rise and spread out as a hydrothermal plume in the ocean currents, similar to a smoke plume in the atmosphere, Collier says.

That will get us closer - perhaps to within a ridge segment, says Collier.

Next, the researchers use sensitive tools to look for chemical and physical signals from active hydrothermal vents.

Today, one of the most useful tools for detecting hydrothermal plumes is called a CTD sensor (Conductivity-Temperature-Depth). It acts like a toy yo-yo as it moves up and down in the water. Since the CTD is towed behind the ship, scientists nicknamed this technique a tow-yo.

"We lower the CTD near the seafloor and then raise and lower it using the ships winch through several hundred meters of seawater while we slowly move the ship across targets mapped by the geologists," says Collier.

The CTD«s job is to measure the salinity, temperature and clarity of the seawater at various depths. Using the data sent up the conducting cable that connects the CTD to the ship, scientists map hydrothermal signals detected in the water column above the seafloor.

Once a hydrothermal plume is detected, they send an electrical pulse down the cable. That triggers a sample bottle on the CTD frame to collect a water sample.

When the CTD and water sample bottles are hauled back on the ship, the researchers take the water samples and transfer them the ships laboratory. There they perform analyses to identify hydrothermal chemicals such as iron, manganese, methane and hydrogen.

"Some of these samples tell us how close we are," Collier says. "If significant hydrogen is detected, we are very close to a high-temperature vent. Mostof the iron from vents rapidly forms particles within the hydrothermal plume.More dissolved iron, compared to its particulate form, tells us we are very close -- probably within a few hundred meters or less of the seafloor vent."

"When we are very close, we can see buoyant fluids that are still rising ... now its really time to put the cameras and ROV over the side!" At this time geologists start mapping the site and biologists prepare to collect samples.

"And our team can go to bed," says Collier, "until the biologists have sampled what they need and let us come back to find the next dive target." 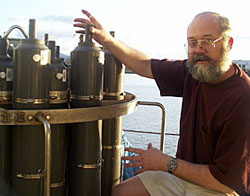 Bob Collier checks one of the water sampling bottles on the CTD frame.