The MR1 side-scan sonar is a special type of seafloor imaging system that creates maps of seafloor terrain over wide swaths. The HAWAII MR1 (the name stands for HIG Acoustic Wide-angle Imaging Instrument, Model Revision 1) was designed by the Hawaii Mapping Research Group (HMRG) at the University of Hawaii in 1991. Dr. Margo Edwards, a scientist on board Dive and Discover's second expedition to the East Pacific Rise, is the Director of HMRG.

MR1 is a portable side-scan sonar seafloor imaging system that simultaneously acquires digital bathymetric data (or seafloor elevation) and acoustic backscatter images (or textures) as the system is towed behind a research ship moving at 6-10 knots. Side-scan information is similar to what you'd see if you took an aerial photograph of your hometown. The locations of houses, trees and cars would be apparent, but it would be hard to tell where there were hills and valleys. That information  the shape, or topography, of the land  is provided by the bathymetry data. By combining the broad shapes with the fine-scale textures, geologists are better able to understand the processes taking place on the seafloor.

The MR1 sonar fish is 5 meters long and is tethered to the stern of the ship by a cable that is about 500-600 meters long. The cable sends power down to the sonar fish and also transmits data it collects back to computers in the ship's lab for viewing and processing. 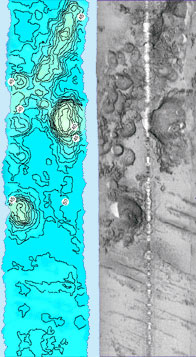 MR1 bathymetry and acoustic imagery of small volcanoes (top)and abyssal hills (bottom) in the North Pacific Ocean. Bathymetry contour interval is 100 m, annotated in hundreds of meters. Sidescan swath width is 20 km. These images contain 3 hours of data that were processed, gridded and charted at sea -- no additional data processing has been performed.Can you calculate the width of the swath of bathymetric and acoustic backscatter data in water that is 2000 meters deep? The answer is at the end of thisHot Topic.

MR1 can resolve the heights of different features on the seafloor to an accuracy of about 2-3% of water depth -- not quite as well as multibeam sonars mounted on the hulls of many oceanographic verticals, which have a vertical resolution that is accurate to < 1% of water depth. However, the side-scan acoustic imagery produced by MR1 is much better than that produced by multibeam systems. That is why scientists on the Galápagos Expedition are using both MR1 and multibeam to map the seafloor.

The MR1 sonar has been successfully used in nearly 30 different scientific and commercial research programs over the last 10 years all over the world, even in very rough sea conditions (up to Sea State 8). The key characteristic of this type of sonar is its combination of elevation with fine-scale details. The almost photographic quality of the side-scan imagery allows very detailed structures, such as seafloor faults and fissures, lava flows and volcanic cones, and areas where there is soft sediment as opposed to hard rock, to be imaged and mapped.Using MR1, geologists can produce detailed geological maps quite quickly over broad regions of the seafloor.

When the water depth is 2000 meters, the swath of bathymetric data is 6.8 kmwide, and the swath of acoustic backscatter data is 15 kilometers wide. 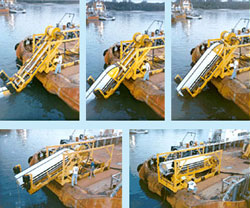