Rachel Haymon is a marine geologist and sulfide geochemist in the Department of Geological Sciences at the University of California - Santa Barbara. She and Dan Fornari have been collaborating for the last decade on several projects involving hydrothermal and marine geological research at the East Pacific Rise in the 9°-10°N area.

Rachel sent Dan an email on December 5, 1999 with an idea that she and Dr. Patricia Holden, a microbiologist at UCSB, had regarding some of the hot sulfide chimneys. They requested that we use Alvin to collect pieces of the crystalline chimneys that precipitate around the hot "black smoker" fluids which had Alvinellid worms growing on them. They also wanted a sample from an active chimney that did not have any Alvinellid worms growing on the sulfide surface. [Click HERE to learn all about hydrothermal vents] On Dive 3531 (expedition 2, day 6), Pat Hickey collected a sample from "Dave" Vent for this experiment

We know that chimneys grow larger with time, and become homes for vent animalssuch as mussels, worms, crabs, zooplankton, and fish. [CLick HERE to learn all about vent biology] One other type of life form that livesin the hydrothermal chimneys is microbes! These miniscule organisms live in thetiny spaces between the crystals in the chimney walls, and on crystal surfaces.

The sample from Dave Vent will be used to try to identify the different typesof microbes that are present at this East Pacific Rise vent, and will be usedto determine whether they are producing or consuming some of the minerals presentin the chimney wall.

Drs. Haymon and Holden will do this by examining pieces of the chimney at veryhigh magnifications using a scanning electron microscope (SEM) and by extractingand identifying genetic material from the microbes in the chimneys. It is importantto study microbes that live at the high temperatures and low-oxygen conditionsfound in hydrothermal chimneys. Similar conditions are common inside the Earth,and possibly on other planets, and it could be that similar types of microbeslive in those places.

Another important point about this research is that the earliest life forms on the Earth may have been microbes that evolved in seafloor hydrothermal systems similar to the ones at the East Pacific Rise crest. No one knows for sure, but the genetic material of microbes living today at deep ocean hot springs on the mid-ocean ridge crest indicates that these are the most primitive types organisms yet to be identified on the Earth. Ancient seafloor hot springs may therefore be the crucible in which life on Earth originated some 4 billion years ago. Microbes in chimneys at mid-ocean ridge hydrothermal vents could hold the long-sought key to the question of how life began. 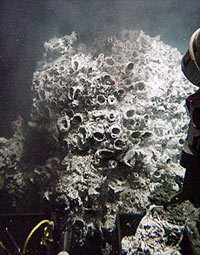 A clump of Alvinellid worms on Dave Vent that was sampled for theexperiment. If you look closely at the photo you can see the small red wormssticking out of their tubes. 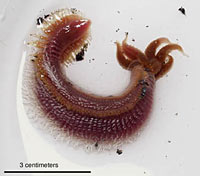 One of the Alvinellid worms recovered from “Dave” Vent. 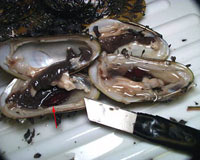 A close-up view of a hydrothermal vent mussel, note the small arrow to the left of the razor blade that points to the small flat worm that lives with the mussel. 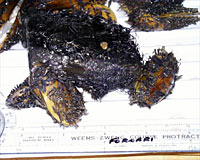 A sample of lobate lava covered with mussels, both large and small, collected from the base of TY vent. 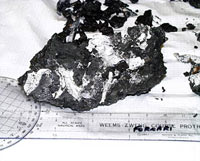 Photograph of one of the samples of “Dave” Vent that will be used for the microbe experiment.