On land, its usually easy to spot volcanic activity. Erupting lava is the most obvious sign, but volcanism also produces large changes in the gases and liquids that reside in the Earth. Hot springs and geysers in volcanic areas, such as at Yellowstone National Park or on the islands of Hawaii and Iceland, also provide impressive evidence of volcanic activity.

But ocean scientists cannot see into the deep ocean and it is very difficult to dive into it. So they need to be clever about how they detect submarine volcanic eruptions. We are using an ingenious new way to monitor volcanic activity on the global mid-ocean ridge: the Autonomous Hydrophone Array (AHA). Then, to home in on possible eruption sites along the East Pacific Rise, we will use five MiniatureAutonomous Plume Recorders (MAPRs), which were loaned to us by Dr. Ed Baker of the NOAA Pacific Marine Environment Laboratory (PMEL) in Seattle, Washington, one of our Shore based Collaborators. Dr. Baker and his colleagues at PMEL are the developers of the MAPR sensors.

MAPRs are small instruments that measure three things: First, they measure ocean pressure (which goes up the further you go down) and thus tells us how far the MARRs are below the ocean surface. They also measure how warm and how clear the ocean waters are. Both of these measurements can provide telltale signs of hydrothermal vents-which become very active immediately after submarine volcanic eruptions.

Fluids flowing out of seafloor at hydrothermal vents on the mid-ocean ridge are hotter and more buoyant than seawater, so they continue to rise through the ocean.But as the hot hydrothermal fluids mix with the abundant surrounding sea water, they begin to cool down. The fluids continue to mix with the ocean water until they are diluted enough to have the same density as the surrounding ocean water. At this so-called level of neutral buoyancy, the mixture of hydrothermal fluid and ocean water stops going up and down and begins to spread out horizontally.So, a single black smoker chimney venting hydrothermal fluids, or even a small group of chimneys that might occupy an area no larger than a classroom, can produce a hydrothermal plume that can extend across many kilometers of the ocean near the seafloor. You can see a similar phenomenon on land. Smokestacks of factories or power plants also produce plumes of smoke that rise to a certain height and then spread out for miles and miles, sometimes moving downwind.

Heres where the MAPRs come in. They can detect the warmer water temperatures of a hydrothermal plume. Hydrothermal fluids are not only hot, they also contain lots of dissolved particles, which makes the fluids look like black smoke spewing from a chimney.

The MAPRs also have a device to measure how light is scattered through seawater. If the water contains hydrothermal particles, then light sent out from a sensor on the MAPR will bounce strongly off the particles and back to the sensor. That is a signal that the sensor has come upon a plume. If the water is crystal clear, as is typical for most deep ocean water, then very little light will scatter back. A similar effect also occurs in air on land. When you drive though a foggy area at night, a lot of light from your headlights will bounce back from water droplets that comprise the fog. When the air is clear, the light doesnt bounce back at all.

Hydrothermal plumes in the area we will be surveying typically rise between 100and 300 meters above the seafloor. We will attach five MAPRs onto the fiber-optictow cable for the DSL-120 sonar and Argo II vehicles at heights that should passthrough any hydrothermal plumes that might be present. The light-scattering dataand the temperature data should give us a very good idea of where any hydrothermalactivity is occurring on the seafloor. Strong hydrothermal activity may meanthat there has been a recent eruption -- which is what we are looking for! We willuse the MAPR information to plan our Argo II surveys and rock sampling. If weencounter very strong hydrothermal activity and actually see vents in the Argocameras, we will try to collect samples of the water using a CTD system (whichmeasures the waters Conductivity, Temperature and Depth). We will alsouse a clamshell grab to collect samples of hydrothermal animalsliving in the vent communities.

Rob Palomares, Scripps technician, prepares a Miniature Autonomous Plume Recorder (MAPR) for deployment. The larger titanium cylinder he is holding is a pressure housing that contains electronics and batteries. The smaller metal cylinder near the bottom is the light sensor. The two narrow tips sticking out of the pressure housing are the temperature and pressure sensors. The white semi-circles indicate where the MAPR clamps on to the fiber-optic cable.

Rob Palomares checks out one of the MAPRs. Data from the MAPRs is downloaded into the computer in the background, which also programs the MAPRs for their subsequent deployments. 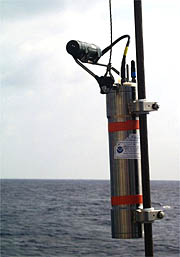 A MAPR is hung on the fiber-optic cable 200 meters above the DSL-120 sonar and lowered to the seafloor for the first time on the cruise.