The Earth has a magnetic field because it is essentially a big magnet. The reason why the Earth is a magnet is because it has an inner core that is made of solid iron and nickel, two very magnetic materials, and an outer core that is more liquid. The two parts of the Earths core are both in motion, but they do not move in exactly the same way. Much like an electromagnet that forms when you rotate two magnetic materials around one another, the Earths core sets up a very strong magnetic field for planet Earth.

The Earth is like a big magnet with a North pole and a South pole that lie close to the geographic poles. The strength of the Earth's magnetic field changes with time, and about three times per million years it flips so that the field points completely in the opposite direction. These changes in strength and direction of the Earth's magnetic field are recorded in the volcanic rocks beneath the seafloor. When hot lava erupts on the ocean floor and cools it not only crystallizes, but it also becomes magnetic. This is because the magma that seeps from the Earths mantle has a lot of iron in it. The magnetic crystals in the cooled lava have become little magnets, all pointing in the direction of the magnetic field of the Earth. The more of these little magnetic crystals there are in a rock, the stronger the magnetic signal of the rock is.

The lava erupted on the seafloor is the most magnetic because it has the smallestcrystals. The crystals have no time to grow any larger because the cold, nearfreezing seawater at the bottom of the ocean makes the lavas cool very fast.The dikes, which are the frozen conduits, or pathways that supplied the magmato the seafloor, are less magnetic because they dont cool as fast as thelavas . The least magnetic rocks in the ocean crust are the gabbros. Gabbrosare found in the lower half of the oceanic crust because they cool very slowelyallowing the largest crystals to grow.

With a magnetometer mounted in one of Alvins baskets, we can measureminute changes in the Earths magnetic field that are caused by changesin the magnetization of the rocks directly beneath Alvin. In this way,we can find out whether the rocks beneath the sea floor on the mid-ocean ridgecrest are very magnetic or not so magnetic. For instance, if the measurementsindicate that the rocks are not so magnetic, then there may be dikes hidden beneaththe seafloor.

If the magnetic survey lines are long enough we also get information about whenthe Earths magnetic field has flipped and how the strength of the magneticfield has changed. This has happened many times in Earths history forreasons that geophysicists are still trying to figure out.

With a magnetometer mounted on Alvin we can measure small differences in the magnetization of the rocks directly beneath Alvin. Here we show how Alvins magnetometer detects weakly magnetic dikes flanked by strongly magnetic lavas beneath the seafloor. 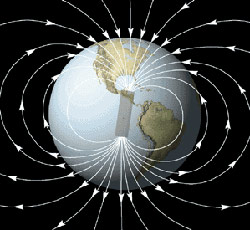 The magnetic field of the Earth.