Approaching from sea—the only way to get there—the town is hard to see at first. Far from home, it clings to rock at the water’s edge and at the foot of a glacier. There are just a few buildings, dock, and fuel tanks. This tiny town is Palmer Station, on the Western Antarctic Peninsula—the smallest of three research stations the U. S. maintains in Antarctica.

This town has a single purpose, and everyone here is a part of it: scientific research on the Antarctic coastal ecosystem, especially long-term research to track changes in this delicately balanced, vulnerable system. Scientists apply for research grants to come here and study this area.

Tracey Baldwin, Palmer Station Lab Manager, is one of eight people who take care of the station and the needs of visiting researchers. She is two months into her six-month shift, but said, “it only takes about two weeks for newcomers to settle in.”

One wall of her office is papered with prints and photos; the other holds a whiteboard for notes, and the outside door bears a magnetic word board and a jumble of separate words. Her doorway is hung with artificial feather boas in black and purple, and entering her space, you brush against the soft fringe.

“People don’t decorate their bedrooms at all here,” she said. “It’s pretty much just for sleeping.” In the summer, when we have visiting researchers, you don’t have a private room.” Your office, though, is personal. The culture here, she said, is to be with others. “People collect in the common room or the recreation rooms,” said. “They don’t hole up in their rooms.”

The lab manager’s job is shared, alternating time spent in Antarctica. The lab manager ensures that the well-equipped biology laboratory runs smoothly. She makes sure the instruments work, orders lab supplies, and ensures the scientists have what they need—whether it’s a chemical or a boat to take to a nearby island.

Tracey wears a radio at her belt, and keeps it turned on. An important part of her job is keeping in touch with any scientists who are outside the station, or in boats, observing birds or sampling, “I keep track of where field samplers are, with the Station boat,” she said. “Weather conditions change quickly, and as summer wanes it gets dark earlier, so now 8:15 p.m. is too late for the boat to be out. I make sure they get back on time.”

The station includes a living area, a dining area, offices, a dormitory, a laboratory, and a boathouse. It shelters a winter population of about 20, soaring to 44 in the summer, made up of about six research groups. Even this makes some residents feel cramped! So behind the station, away from the lights and sounds of the six small buildings, people set up tents in summer. There, on rocks overlooking the place where the glacier meets the bay, they can see and hear the glacier calving and watch birds undisturbed. This is “the backyard.”

The climate here is mild—for Antarctica—because the surrounding ocean moderates the temperatures. Summer highs can reach 55 degrees F (13 degrees C). Ships can dock at Palmer Station all year, so it is not as isolated other research stations on the continent, and research ships come and go regularly.

Tourist ships come also. In summer, one or two cruise liners a week are permitted to dock, carrying up to 150 people each. Forty-five at a time can tour the station and walk on the glacier. Palmer has a small store, open occasionally, where tourists can buy souvenirs such as t-shirts, mugs, and hats. “The money from the store goes to the Palmer Station recreation fund,” says Tracey. “We have better recreation facilities than other stations because we have tourists.”

Local wildlife, and icebergs that move slowly past the harbor entrance, regularly visit Palmer too. The original station was built near here in 1965, and the current one in 1970. It’s an ideal location for studying and observing wildlife, including penguins, sea birds, and seals. An Adélie penguin rookery on Torgeson Island is only a five-minute boat trip away; other seabirds nest in the area. “Seals sometimes lie outside the door,” said Tracey. “We’ve had four or five in two months. Twice this year huge elephant seals, separated from their group, tried to get to them through the Station.” By U.S. policy, no one may disturb wildlife, so they had to shoo the seals away by holding up blankets and shaking them.

Sometimes when a larger liner comes by, Tracey and Station Manager Joe Petit run out to it in the Zodiac (inflatable boat), to talk about the environment and research going on at Palmer Station. “It’s a good forum for us,” she said. “Taxpayer dollars support this facility, this is an opportunity for us to tell people about what we do and why we are here: for research, to learn about this system before it changes.”

“It’s already changing here near Palmer,” said Joe. “Each year there are fewer penguins at the rookery. They may be moving south, where there is more ice.” 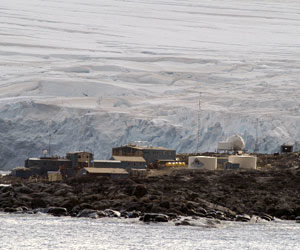 Palmer Station, with the glacier behind it. (Photo by Byron Pedler, WHOI)