When a volcano erupts, the molten rock (or magma) that comes out of the Earth is called lava. Because lava is so hot (more than 1,100 degrees C, over 2,000 degrees F), it remains molten and flows across the ground until it cools and hardens into rock. Lava is the most common form of material erupted from volcanoes that form oceanic islands like the Galápagos and Hawaiian Islands. Lavaflows are usually only 1-10 meters thick, but some flows can be as thick as 50-100meters, depending on the type of lava and the volume of the eruption.

How Long Does it Take a Volcano to Grow?

Volcanoes are created over approximately 10,000-500,000 years by thousands of eruptions -- each lava flow covering the one before it. In the case of oceanic island volcanoes, lava erupts first from fissures, or cracks, on the deep ocean floor. The flows continue to build up and finally an island emerges from the sea. It was only when scientists began sampling the deep ocean floor in the 1950s and 1960s that they realized that most of the ocean floor is composed of lava flows. In fact, more lava has erupted on the sea floor than anywhere on Earth,mostly from mid-ocean ridges -- the longest chain of active volcanoes on ourplanet.

What Types of Lava Flows Are There on Land?

On land, there are two basic types of lava: aa (pronounced ah-ah) and pahoehoe(pronounced pah-hoy-hoy). Polynesians use these words to describe a smooth, rollingsea (pahoehoe) or a rough, choppy ocean (aa). Because a lot of our knowledgeabout volcanoes has come from studies on Hawaii, these Polynesian words are nowcommonly used to describe the roughness of a lava flow.

Aa lava flows have a very rough, rubbly surface because of their high eruptionrates. As the upper surface of the lava cools and becomes rock, it is continuallyripped apart by the moving molten lava inside the flow. Pieces of the rocky surfaceare broken, rolled and tumbled along as the lava flow moves. When finally cooledto a solid, aa lava flows look like a jagged heap of loose rock that isvery difficult to walk over without stumbling and getting cut. Charles Darwindescribed the aa flows he observed in the Galápagos as a seafrozen in its most boisterous state.

What Types of Lava Flows Are There Underwater?

Lava erupting on the deep sea floor has a form most like pahoehoe flows. Threetypes of lava flows are common on the sea floor: pillow lava, lobate lava, andsheet lava. Scientists believe the main difference between the shapes of submarinelava results from how fast the lava erupts from deep-sea fissures and how steepthe seafloor is that the lava travels over.

Pillow lava is so-called because it forms rounded lumps that looklike fat pillows, or the bolster cushions of a sofa. The pillows can form pilesa few to tens of meters high. Pillow lava flows can be many hundreds of metersto kilometers long.

Pillow lava forms in the following way. As lava erupts on the ocean floor, itsouter surface cools and solidifies immediately. Within a fraction of a second,a frozen glassy skin is formed that surrounds the hot lava inside. Continuedpressure of lava pushing from inside the flow causes the pillow to stretch andexpand, like a water-balloon. New pillows form when hot lava bursts through thechilled skin of a previous pillow.

Pillow lava is very common on the Mid-Atlantic Ridge and the Juan de Fuca Ridge,which are spreading at slow to intermediate rates (about 2-5 centimeters/year).It can also form on continents when lava from an on-land volcano flows into alake or a river.

Lobate flows resemble on-land pahoehoe flows, but are a bit more inflated-looking.They are very common on fast-spreading mid-ocean ridges such as the East PacificRise.

Sheet flows form at much higher eruption rates than pillow flows. The high eruptionrates allow rivers of lavas to form that can flow across the seafloor. Theserivers can fill low areas in the seafloor and form lava ponds with very flatsurfaces. Lava in the ponds can also spread like thick pancake batter on a tiltedgrill, forming a long tongue-like flow. Sheet flows can have flat surfaces aswell as twisted, ropy ridges all aligned in the direction that the flow movedacross the seafloor.

What are Lava Tubes?

Lava tubes are tunnels that form within a lava flow during an eruption. As lavaflows away from a volcano, the surface chills quickly and insulates the stillmolten lava beneath. Rivers of lava can continue to flow for great distancesin the tunnel beneath the chilled and solidified surface before it cools andbecomes hard rock.

As the eruption slows down and lava stops flowing, the molten lava drains fromthe tube leaving a long hollow cave. These tubes can be several kilometers longand many tens of meters in diameter. The Thurston lava tube, near the calderaof Kilauea volcano on Hawaii, is a famous large lava tube that has been a touristattraction since the late 1800s when Mark Twain visited the islands.

On land, lava tubes are currently forming in eruptions at Kilauea volcano inHawaii and at Etna volcano on the island of Sicily in Italy. Old lava tubes arecommon on many volcanoes. There are lava tubes near the summit of the volcanoon Santa Cruz Island. On the seafloor, lava tubes have been observed at mid-oceanridges. They are believed to be responsible for helping to distribute lava togreat distances away from eruption sites. Geologists think lava tubes may alsobe present on the Moon and Mars. 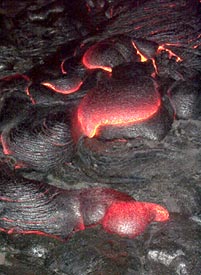 Pahoehoe toes forming in the active part of the Puu Oo flow, Kilauea volcano Hawaii in April, 2000. Scale across photo is about 2 meters. Photo by Bruce Applegate, HMRG.