To the Paul Revere Science Club

To: The Paul Revere Science Club

Yesterday was our second dive in Alvin. The first day (Tuesday) we barely touched the bottom at 2550 meters when we had to drop our weights and come back up to fix a minor problem, a few drops of seawater in an electrical connector. Yesterday, though, ALVIN was raring to go and so were we. BLee (Bobby Lee Williams) was our pilot, he was very good at finding his way around on the inky black bottom.

What is it like to dive in Alvin? Once the ship (ATLANTIS) lowered the sub and cast us off, we bobbled around on the surface while the outside divers, with snorkels, detached all of the lines and checked around ALVIN to make sure everything was OK. Then Captain Silva on the ATLANTIS gave us the OK to dive. BLee flicked the switches that dumped our air tanks and we started down, down, down. There is no sensation of going down and we descended at a leisurely 37 meters a minute, about the speed of a very slow freight elevator. In one-and-one-half hours we reached the bottom, one-and-one-half miles below.

Inside the 7 foot diameter titanium ball that had just became our home for the next 8 hours, it was eerily silent - only the pinging of the sonar from ATLANTIS, the high pitched whining of the air scrubber and the faint hiss of oxygen freshening our air. For eight hours we re-breath the same air, scrubbed and doctored but the same air.

For the first 50 feet we can see blue water out the window. A blizzard of little white flecks passed by my porthole. This was plankton along with other tiny marine animals. Pat, our pilot Tuesday, called it Sea Snot. Ugh!

At 300 meters down, the light from above became very faint. At 1000 meters it was pitch black outside. An occasional bio-luminescent fish, glowing like a Christmas tree light, would drift by surrounded by total darkness. Inside the capsule we had very dim light, most of it was the light from Alvin's radios and instrument panels. The CD player had finished Von Suppes Light Calvary Overture and was now playing Minnie The Mermaid Down At The Bottom Of The Sea.I don't think Alvin would dive if the CD player didn't work!

We touched down on the black and gray lava and headed North, soon picking up a trail of pure white crabs. Our first stop, and maybe most spectacular sight, was TWP--the Tube Worm Pillar. The pillar rises like a church steeple. It is 15 meters high. At the base are dead tubeworms. They are stacked in a pile and look like white spaghetti. As BLee guided Alvin up the pillar more dead worms came in sight, then live worms near the top. We hovered at the top amidst a most beautiful garden--of worms. There were hundreds of them, maybe even thousands...I couldn't count. BLee tucked Alvins nose into the worms at the top of the pillar. The bodies of these worms are long white and round. Maybe 6 foot long and 1 & 1/2 inches wide. the head of the worm is brilliant red and it's mouth has hairy filaments in a slit where it takes in its food. The hydrothermal fluids are spewed out of a vent at the top of the Pillar. There were also several white crabs at the top of the Pillar. The crabs eat the tubeworms when they pop their heads out to feed! Nasty stuff goes on down there. BLee used one of the manipulator arms, you've seen them on the front of Alvin, to insert a probe into the vent to measure the temperature of the hot water it was spewing out at 274 degrees Celsius. No closer BLee, please!

After TWP, we headed North along the axial trough - the narrow valley where all the new lava and hydrothermal vents are. Be sure to look at the beautiful drawing of the trough that Paul Oberlander made. He is an artist who works at the WoodsHole Oceanographic Institution who is out here with us on the cruise. We could see the basalt cliffs on either side of the trough. This is where the huge plate that is the floor of the Pacific Ocean is pulling away from its smaller brother called the Cocos plate. These two plates pull apart at 11 centimeters every year.Where they separate, right where we were, the Earth is split open and hot molten magma flows up, cooling and hardening when it comes in contact with the sea water.It's not happening now or wed be toast! Sometimes the sea water gets trapped within the hot magma and makes vents, like tea kettle spouts, to get out. On the way out this sea water is so hot that it dissolves and melts minerals and spews them out the top of the vent. This is very yummy food and why we see colonies of tube worms, crabs, mussels, shrimp and other critters hanging out around the vents. The hotter the water, the better the meal. Actually the hot water that has nasty, rotten egg smelling sulfide chemicals in it is food for the bacteria which live together with the tube worms. We didn't try to taste any of the water because we had peanut butter and jelly sandwiches that Jay, the cook, made for us. Anyway, there are several million pounds of water pressing against our only door (the hatch), and we couldn't open it even if we wanted to.

We saw lots of shrimp, some clear see-through shrimp and some reddish shrimp.Maybe the reddish ones got too close to the hot water coming out of the vents and got cooked! We saw a rare purple octopus (It wasnt very big) and some beautiful sea anemones. And a black smoker! We went right up to it, (BLee is fearless) and snapped off a chunk of vent for the scientists to study. Along the way down the axial trough we picked up up some chunks of lava and retrieved a temperature probe from an earlier expedition that had fallen out of it's vent.It doesn't seem like it, maybe because our speed is less than one mile an hour, but we had been down on the bottom of the ocean almost 5 hours. It was time togo up. BLee called the ship and they said it was OK to come up. Bob, my companion, won the prize to flip the switches that release the weights holding us down.We watched on our little TV screens as the weights dropped to the ocean floor and we began our hour and a half ride to the surface.

This was the experience of a lifetime. I hope that at least one of you becomes a scientist some day and is able to make a trip like this. I am very proud of all of you! 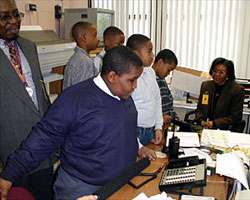