By Karen Harpp and Robert Otto

Charles Darwin visited the Galápagos in 1832. One of the most intriguing facts he discovered was that many of the species in the Galápagos are endemic, which means they are unique to the islands. He also made the key observation that some of the species differ slightly from island to island. This information ultimately led to his development of the theory of evolution and natural selection.

One of the species made famous by Darwins studies is the Galápagos finch. There are 13 types of finches, including ground: cactus, tree, woodpecker, mangrove, warbler, vegetarian and even a vampire finch. The astounding number of finch sub-species is the result of adaptation to the different food sources available on each of the Galápagos Islands. For instance, on islands with many trees, some finches have beaks specially designed for breaking up rotten wood to get to insects (the large tree finch). On islands with big tortoise populations, finches have developed small, sharp beaks for picking ticks out from under the shells (its pretty hard for tortoises to do it by themselves). The tortoises even stand in a special position to make it easier for the small ground finches to reach every nook and cranny of the tortoises leathery skin.

Perhaps the most well known resident of the Galápagos Islands is the giant tortoise, the namesake of the archipelago. The word "Galápagos" may have been given to the tortoises because in Spain, a "Galápagos" meant a horse saddle, shaped like the shells of some of the first tortoises encountered in the region. The abundance of tortoises eventually led to the entire region being named the Galápagos Islands. Nobody actually knows how long Galápagos tortoises live, but estimates are up to 150 years or more. Galápagos tortoises are herbivores (they only eat plants), have shells that are the size of small desks and can weigh as much as 650 pounds.

These animals also exhibit adaptive radiation, like the finches -- this means that they have developed characteristics to suit the environment they live in. For example, the tortoises living on larger islands with abundant vegetation have dome-shaped shells, because their food is easily accessible on or near the ground. Those from smaller, drier islands, where the food source is harder to reach, have developed saddle-back shells. The saddle-back shells, with the arched front end of the carapace, allow these tortoises to extend their necks much higher to feed.

Unfortunately, the tortoise population in the Galápagos has suffered at the hands of humans. Whalers and other seafarers passing through the Galápagos over the past few hundred years have taken over 200,000 tortoises from the islands for food, because the animals could live for nearly a year on a ship without food or even water. Furthermore, young tortoises which have not fully developed a hard protective shell are easy prey for wild dogs and cats. Wild goats have destroyed tortoise feeding areas on many of the islands. Only one tortoise from Pinta Island is still alive; Lonesome George lives at the Charles Darwin Research Station now, and is destined to be the last of his kind.

One of the most bizarre looking animals in the Galápagos is the marine iguana. Apparently, Darwin did not think too highly of these intriguing reptiles. He described them as, "great black lizards...a hideous looking creature". Most people who encounter them, however, find them fascinating and rather endearing. The marine iguanas of the Galápagos are the only sea-going iguana in the world. They can dive up to 60 feet and remain submerged for up to an hour or more. They use their specialized, flattened tails to swim, and tuck their legs up against their bodies while in the water. Most of the time, the iguanas bask in the sun, trying to warm up after extended time in the cold ocean waters foraging for seaweed and algae. Galápagos marine iguanas are usually between one and three feet in length. They have a dull gray-black coloring that almost perfectly matches the basaltic rocks of the islands, making them hard to see and serving as good protection. During the mating season, some males display a red coloration and become quite territorial. Iguanas from different islands sometimes exhibit unique colors due to their diets, as well. Those inhabiting islands with dominantly green algae develop a dark greenish coloration while those from islands with red algae appear quite red.

The marine iguanas are related to the more-rare land iguana. Marine iguanas split off from their ancestor, the green iguana (from South America and the Caribbean), over 15 million years ago. Land iguanas are much larger, averaging over three feet in length, and have a pointed nose instead of a square one. They feed on plants and insects most of the time, but are also particularly fond of parts of the opuntia cactus. Land iguanas live in small colonies and are usually found in the driest parts of the islands where they dig burrows in the soil. Their populations have also suffered from attacks of wild dogs, and there is now a breeding program for land iguanas at the Charles Darwin Research Station. In the past 20 years, hundreds of baby iguanas hatched in the safety of the station have been reintroduced to many Galápagos Islands.

For more information about finches and evolution, and a fascinating account of research into evolutionary processes in the Galápagos.see: "The Beak of the Finch", by Jonathan Weiner, Vintage Books, Random House, Inc., New York, 1995. 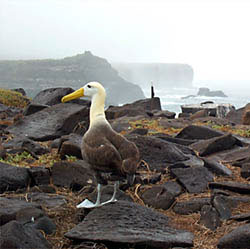 The waved albatross is found only on Espanola Island in the Galápagos; the only place in the world where it nests and reproduces. It lives in the Galápagos from mid-April to mid-December, and spends the other six months on the open ocean as far away as Japan. This albatross is the largest bird in the Galápagos, with a wingspan of over 2.5 meters. These birds feed at night, far from shore. (Photo by Rob Otto, 2001)