By Rhian Waller and Tim Shank

The worlds oceans have roughly 300 times more area to support life an do the worlds continents. Because greater than 75% of the deep ocean lies beneath 1000 meters, ocean depths are relatively unexplored and until recently, inaccessible. As we investigate the submarine slopes of Galápagos volcanoes we see life that no one has photographed before. The creatures that live at these depths have adapted to a way of life in one of the world's most challenging environments.

Physophora hydrostatica. A siphonophore, these animals are made up of multiple units, each specialized for a function like swimming, feeding, or reproduction. This "modular" construction allows some siphonophores to grow very large, over 100 feet in the deep ocean. Although most siphonophores live below the surface, the Portuguese Man o'War is one that rests on the surface, suspended by a gas-filled float.

The deep-sea is defined as the part of the ocean below 200 meters depth. This environment Is considered extremely harsh with temperatures of below 5 degrees Celsius, extreme pressure (2,000 meters equals about 200 times the atmospheric pressure at sea level), and no sunlight. Deep-sea animals have had to evolve, often through unusual and unique adapations, to live, reproduce, and thrive in these unique conditions.

Until the late 19th century, many people considered the great depths of the ocean too harsh to support life. As a result, it was largely unexplored. Starting in the early 1800s European scientists began to probe the depths of the North Atlantic to see if they could find life in the deep-sea. Based on some initial sampling that suggested animals lived in the deep ocean, the H.M.S. Challenger was commissioned for an around the world expedition that lasted from 1872 to 1876. It succeeded in finding diverse animal life to 5,500 meters as well as making other important discoveries. Nearly a century later, deep-sea exploration during the Danish Galathea expedition recovered animals from the Philippines Trench, at 10,190 meters.

We know that life can exist at the greatest depths in the ocean, but how have these animals adapted to these extreme environments?

Deep-sea animals have evolved ways to get around the problems associated with living below 2000m.

Given the lack of sunlight at great ocean depths, how do deep-sea animals find each other in the dark?

The lack of sun light has led to unique visual and chemical adaptations. Many fish have the ability to produce chemical light, a phenomena called bioluminescence by oxidizing organic compounds.

Many theories on the purpose of bioluminescence have been put forward, but it is still not fully understood. Scientists think that light might help species communicate, attract a mate or prey, or deter predators. Many deep-sea organisms have developed very large rudimentary eyes to maximize their ability to see this chemical light, like some of the shrimp collected in our rock dredges.

Some animals have developed unique ways of catching their prey. The Tripod fish, Bathypterois, developed large fin rays in its tails. This lets it stand on the sandy seafloor, with outstretched pectoral fins that resemble antennae. The pectoral fins aid these deep-sea fish to feel vibrations in the water and so sense their prey as it approaches.

The immense pressure at depths below 2,000 meters can crush air spaces within humans. This is why submersibles like Alvin have a thick titanium pressure sphere where the pilot and observers sit- so they do not feel the tons of pressure as they descend into the deep ocean.

Most underwater organisms do not have any air spaces. They are made up of entirely liquid or solid material, so are not affected by pressure in these spaces. However, this poses a problem for animals that move around in the water column, how can an animal go down to 2000 meters and return to 1000 meters, or the ocean surface, without gravity making them too heavy to swim upwards?

Whales dive routinely to very deep depths. They do so by taking great gulps of air through their blow holes when they're at the surface. This air moves into the lungs, but as the whale dives deeper the pressure forces air into special sinuses filled with fatty oils. The air mixes up with these oils making an emulsion, so that it cannot be crushed.

Sharks and rays are neutrally buoyant because they have large oily livers (that float) and soft watery flesh (that sink). Some bony fishes have swim bladders. These are gas cavities that constantly have gas pumped in or out as the fish moves up and down in the water column. This means they can make their bodies heavier if they want to go down, or lighter if they want to swim up. In the deep-sea species Coryphaenoides, the Grenadier fish, there is both a large swim bladder, and a large oily liver. This makes them particularly good at going between different depths.

Many organisms are scavengers. They make use of the meager resources that reach these depths, such as whale carcasses, fish excreta, and dead surface plankton blooms. Many invertebrates, like amphipods, survive on the food-fall from the surface, and, in turn, become prey for other larger species.

With every expedition, more species are being discovered. Yet many great mysteries still exist. Species once thought extinct have been found alive (the coelacanth fish is one example). Still other species have yet to be found alive like the giant squid, arch. As technology improves, it will allow us to more closely observe deep-sea animals for longer periods of time and certainly teach us even more about the great and wonderful adaptations that have evolved in the world's oceans.

Diagram on left shows how the ocean is divided into different depth categories. Diagram on the right shows how deep the different colors of light penetrate into the ocean. You can see that red light doesn’t reach down very far, this is why many deep-sea animals are red, so they are camouflaged. 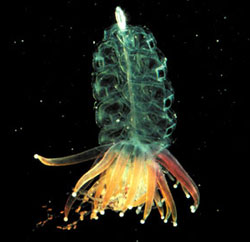 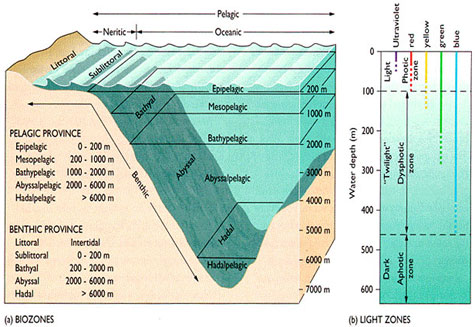 Diagram on left shows how the ocean is divided into different depth categories.