When most people think of corals, they think big. Big, interconnected structures such as the Great Barrier Reef off Australia, which can be seen from the Space Shuttle. Expedition 7, however, is going after much smaller coral formations that lie deep within the ocean, past the point where light penetrates.

That absence of light accounts for many of the differences between deep-sea corals and their better-known peers near the sea surface. Surface corals, such as the Great Barrier Reef and most Caribbean corals, need sunlight to live. Microscopic marine plants called algae live inside corals. Just like plants on land, the algae use photosynthesis to make food, which is also used by the corals. In return for food, the algae get a house-a hard coral skeleton to settle in.

The deep-sea corals that Expedition 7 seeks live beyond the zone where sunlight penetrates, which is called the euphotic (light-filled) zone. So they've had to find ways of surviving that don't depend on light or algae. It doesn't sound pretty, but deep-sea corals live off the dead. More specifically, they live off microscopic organisms that sink to the bottom of the ocean after living their lives closer to the surface.

But it's not a fast track from the surface to the deep-sea corals' "bellies." On the way down, other organisms pick at the dead microscopic material, so that only about 10 percent of it makes it past the euphotic zone. Only one percent of that 10 percent makes it all the way to the bottom-and a tenth of that amount ends up buried in sediments.

From this seemingly scant food supply, deep-sea corals such as Desmophyllum cristagalli (the primary interest of Expedition 7) can live up to 100 years. They grow about one millimeter each year to end up at around 5-10 centimeters in length in maturity. Some surface corals, which can gain nourishment from light, grow ten times as quickly.

In fact, the slow, painstaking growth of deep-sea corals is part of why they are so valuable to scientists. Inside the coral skeletons that we see are colonies of tiny animals called polyps. A polyp is essentially a mouth with tentacles attached. When a food source comes by, the polyps' tentacles reach for it and feed it into their mouths. This is called filter feeding.

Near the ocean's surface, coral reefs are large collections of interconnected corals. On these big reefs, there's a kind of traffic jam of polyps: They're all crowding each other for limited space. In deep-sea corals, on the other hand, the polyps don't have to struggle as much for room. So, they end up larger than surface polyps, even though the overall number of polyps and polyp colonies is smaller in deep-sea corals.

From the chemical information recorded in a particular coral's skeleton, we get a picture of the ocean in which that coral grew. But we only get a picture of one place in the ocean, because mature deep-sea corals are sessile, which means they remain in one place. They cannot walk or swim. Where we find them is where they've always been.

Still, mother corals do have "children," called planulae. Planulae are the free-floating young of older corals, and they can move around for some time before landing on something hard.

This "something hard" is either rock or previous generations of dead corals. Growing corals remain atop these for the rest of their lives, filter-feeding the food that rains down upon them. The ones that land on dead corals form multi-generational fields of corals, called bioherms, which can span thousands of years from the older skeletons at the center to the newer ones on the outside.

Different species of corals form different types of bioherms. While Desmophyllum cristagalli tend to spread out more horizontally, into the shape of a budding mushroom, other genera of corals, such as Lophelia and Madrepora pile their tubular shapes into more vertical, tower-like structures that can rise dozens of meters high.

Because such deep-sea corals are sessile filter-feeders, there are good places for them to grow and bad places. An important goal of Expedition 7 is to figure out where both the good and bad places are, and what makes them good or bad for corals. Previous work shows that more biota (the total number and kinds of plants and animals of a given area) grows near the top of seamounts. Seamounts are mountains beneath the ocean surface. Just as there is usually more wind as you go from the bottom to the top of mountains, there is usually more food at the tops of seamounts.

Knowing this helps Expedition 7 scientists hunt for the most likely places to find corals. We know to look mostly at topographic high points. And we expect that the corals we find there will tell us much more than we currently know about how they reproduce, what their polyps eat, and how different species of coral distribute themselves throughout the ocean. 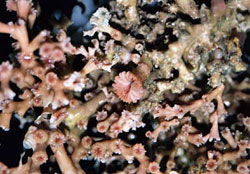 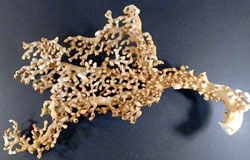