Driving from New York to Miami across 15 degrees of latitude, hardwood forests give way to palmetto scrub. From Washington State to Southern California, again across 15 degrees of latitude, evergreen forests disappear and desert cacti dominate. Any traveler who has noticed these changing botanical provinces has practiced the science of biogeography, the study of the patterns of distributions of organisms and the processes that determine these patterns.

On land, latitudinal changes in climate - humidity, rainfall, temperature - help determine the geographic distributions of organisms. But hydrothermal vents, two to three miles beneath the surface of the sea, are not greatly affected by surface climate. Instead, distributions of hydrothermal vent organisms on mid-ocean ridges appear to be influenced by features such as deep-ocean circulation patterns, by major topographic characteristics such as deep, cross-cutting fracture zones or changes in depth of the ridge system, and by the position and movement of Earths tectonic plates over time.

Based on recent explorations, we know now that across more than 30 degrees of latitude along the East Pacific Rise, there is a single hydrothermal biogeographic province! Giant tubeworms, clams, and mussels -- and many smaller species of polychaete worms, shrimp-like crustaceans, and snails -- have immense ranges, despite physiological and ecological requirements that restrict the adults to isolated vent habitats separated by tens to hundreds of kilometers.

The composition of the animal communities (fauna) at hydrothermal vents is far from the same all over the worlds oceans, however. For example, there is a difference in the vent fauna of the East Pacific Rise off the western coast of Mexico and the vent fauna of the Juan de Fuca Ridge off Vancouver Canada. Why should these Pacific vent faunas be different? The East Pacific Rise goes terrestrial at the mouth of the Colorado River in the Gulf of California, becoming the San Andreas Fault. The fault moves back off-shore at Mendocino, California, and gives way again to a triplet of mid-ocean ridge spreading centers of the northeast Pacific that includes the Juan de Fuca Ridge.

Dr. Verena Tunnicliffe, a biologist at the University of Victoria, suggests that at one time, before the North American Plate overrode the mid-ocean ridge, there was a single biogeographic province in the eastern Pacific. With placement of a continental barrier to dispersal, the hydrothermal faunas began to diverge, eventually forming the sister species we observe today. An example of this is the closely related tubeworms species found at the East Pacific Rise and the Juan de Fuca Ridge.

If Juan de Fuca Ridge and East Pacific Rise vent faunas are sisters, then the vent animals of the Mid-Atlantic Ridge are cousins several times removed. There are many shared families, some shared genera, but few shared species between Atlantic and Pacific vents. For example, shrimp in the family Alvinocaridae are found at both East Pacific Rise and Mid-Atlantic Ridge vents, but Alvinocaris lusca is the Pacific shrimp species, while Rimicaris exoculata dominates at some Atlantic vents.

Perhaps more importantly, geographic isolation of the Atlantic and Pacific Ridge systems can account for some of the faunal differences. Trace the global mid-ocean ridge system starting from the East Pacific Rise in the Gulf of California. There is currently no direct connection to the Atlantic without following the Pacific-Antarctic Ridge south of Australia and into the Indian Ocean along the Southeast and then Southwest Indian Ridges. The Southwest Indian Ridge, after it passes the tip of the African continent, loops northward to become the Mid-Atlantic Ridge. If the East Pacific Rise vent fauna can migrate only by step-by-step migration along mid-ocean ridges, then isolation by distance alone might account for much of the difference between Atlantic and Pacific vent faunas.

Mid-ocean ridges of the Indian Ocean may prove to be the corridor for exchange of faunas between Atlantic and Pacific vents. The Japanese discovery of the Kairei Field on the Central Indian Ridge and our detailed sampling on this expedition are already helping to unravel some of the questions we posed nearly five years ago when we first proposed this research. Of the species we collected from the Kairei Field, some appear to be linked to Atlantic vent faunas, while many others are familiar from Pacific hydrothermal vents.

As is usual for any scientific endeavor, our observations lead us to further questions. To resolve faunal affiliations and to understand what underlying processes control bioegrographic patterns at deep-sea hydrothermal vents, many more vents on the global mid-ocean ridge system need to be explored.

Funding to support this research comes from the National Science Foundation (Biological Oceanography) and The College of William & Mary. 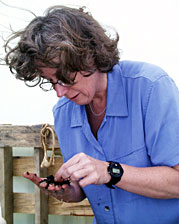 Cindy Lee Van Dover, Chief Scientist of this expedition, is a professor of biology at the College of William and Mary in Williamsburg, Virginia. She is an expert on hydrothermal vent ecology. 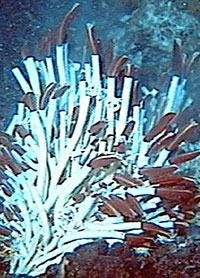 Giant tube worms, called Riftia, grow up to 6 feet long and are commonly found at vent sites on the East Pacific Rise. 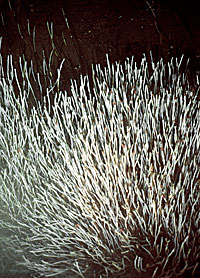 A different species of tube worm, called Ridgea, live at vent sites on the Juan de Fuca Ridge in the Northeast Pacific