Keeping the “Big O” Out of Alvin

Submarines are often called “electric boats” because they need lights and power to see and move, computers to log data, and sensors to measure temperature and pressure. Add to that the manipulation capabilities and the needs of the scientific equipment that Alvin uses, and you can see why Alvin needs electricity to operate.

Understanding how electricity can be safely used in the “Big O”, as submariners sometimes call the ocean, is one of the first and most important lessons a new submariner learns. Seawater is able to conduct electricity very easily. Very pure water will not conduct electricity, but if you add salt to it, then electricity will pass through it because of the dissolved salt. The electrical energy to run Alvin and all its tools is stored in big batteries made up from lots of high-power golf cart batteries. It is very important that the energy stored in these batteries is not allowed to “leak” out of Alvin. Apart from wasting precious power and not being able to complete all the science planned for a dive, leaking power causes damage to equipment.

Electricians call leaking power a “ground.” When a piece of equipment becomes grounded, the electricity no longer flows through it correctly. Instead of staying in the wires, electricity gets out where the equipment is plugged in or, in the case of equipment on Alvin, into the pressure housing (the titanium metal case that protects the wires and components from the pressure in the deep ocean). These grounds allow the electrons holding together the atoms of metal in the electrical wires to “float” away into the ocean. If the ground is bad enough, or is left uncorrected, the metal actually begins to disappear as the bonds holding the atoms together are removed. This is called “corrosion.” Pretty soon, the wire disappears and electrons can no longer move along it. This could lead to electrical connectors failing and could let seawater into pressure housings or even the Alvin personnel sphere.

Grounded equipment does not work properly, so sensitive instruments that rely on electricity from Alvin's batteries need that power to be good, or “clean” as electricians call it. Alvin's electrical team (ETeam) is primarily responsible for the sub's electrical systems and testing for grounds on all its permanent equipment, as well as additional equipment that different scientists bring out to do their experiments. The ETeam inspects Alvin;s electrical system for grounds before and after every dive. During the dives, the pilots check for grounds frequently. Equipment that becomes grounded is never operated. Even a “little” ground on a piece of electronics is not “good enough”; it is either not grounded or it is not used.

I tell new members of the Alvin Group: “It's nice to love the sea, but a healthy respect for the awesome power of the water is what will keep you alive.” Keeping track of grounds and where electricity is flowing in Alvin is important when working in the “Big O. 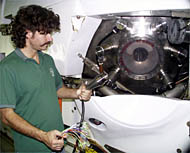 BLee Williams holding one of Alvin's penetrators. These penetrators are located around the viewports and are where wires from outside of Alvin's sphere come inside the sub. 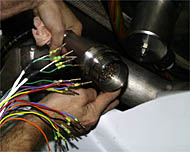 A close-up view of one of Alvin's penetrators.