What Is It Like To Go Down In Alvin?

It's like being Galileo, Jacques Cousteau, and Captain Nemo (the captain of Jules Vernes submarine Nautilus in Twenty Thousand Leagues Under the Sea) all wrapped up in one. You are an inventor, explorer, and scientist. Let's go down together!

It is time to leave!! You climb the stairs on the side of the A-frame to the top of Alvin. You are excited but slightly nervous at the thought of what you are about to do. You remove your shoes and stow them in the bag at the top of the steps. You climb down a narrow ladder through Alvins hatch, trying not to step on the head and arms of the pilot who is finishing his final checks of all the submersibles systems. You sit down on the floor of the pressure sphere, which is only two meters (six feet) in diameter, then crouch to one side of the sphere so the other scientist can get in.

The Alvin crewhas already stowed your bag containing warm clothes and a notebook in the sideof the sphere where you will be sitting. Even more important, the galley haspacked a lunch for everyone. It includes sandwiches, fruit, water, coffee, andmaybe a chocolate bar!. The pilot radios the Top Lab Control and the Atlantis bridgeto say: Closing the hatch. From this point on, you are a self-containedlittle probe set to explore the seafloor.

The A-frame lifts Alvin off the deck of the ship. Suddenly you are over open water. The A-frame stops. You hear the main lift line winch grumbling. Slowly you descend. Ten seconds later, you splash down. Water gurgles over the view ports. You see the swimmers working on the outside of the submarine, checking everything before it dives. Inside, it is a little warm, but you've been told it will get cooler as you descend. It is noisy due to the whirring of motors and the scrubber. The scrubber is a blower that forces the air you are breathing through a filter containing soda-lime. The soda-lime absorbs carbon dioxide so that the air in Alvin is good to breathe.

The submarine gently rolls in the calm water as the pilot picks up the CB microphone. Atlantis, this is Alvin. ID light is on. All leaks, dumps, and grounds normal. Scrubber is scrubbing. Oxygen is on. Request launch altitude and permission to dive. A few seconds later, the reply comes back. Alvin, this is Atlantis. Launch altitude 2005 meters. You have permission to dive. The pilot replies: Roger, Atlantis. Alvin diving.

Ten minutes later, you notice that it is getting dark outside the view port. At about 400 meters depth (1312 feet), so little sunlight penetrates down that the water appears pitch black. You have just passed below the photic zone and are now entering the deep dark ocean. Its getting cold, so you put on your sweatshirt, sweatpants and wool socks while trying not to kick the other observer or the pilot. The pilot tells you to look out the view port. You put your nose up to the plastic. Suddenly you see a burst of light and what appears to be a long string of slimy stuff slipping out of view. The middle part of the ocean contains tons of life, much of it gelatinous, and some of it bioluminescent. One of these animals has just spattered against your view port. All the flickering lights of the animals remind you that you've entered a place where many animals live but where few people have seen.

Two hours pass by. The pilot informs you that you are only two hundred meters from the bottom and that you should get ready. You pull on your ski cap, ready your pens and tape recorder, and review the dive plan with your partner and the pilot. The pilot asks you to keep an eye out for the bottom. Bottom in sight, the other observer calls. The pilot releases two of the 208-pound descent weights and adjusts the buoyancy until Alvin floats just above the seafloor. All is ready for another exciting day of science and exploration on the ocean floor. 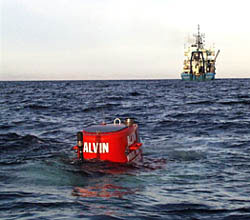 Alvin in the water with atlantis in the background