Looking for new volcanic eruptions on the global mid-ocean ridge and understanding when and where eruptions take place is one of the most exciting developments in marine geology and geophysics. Volcanoes, earthquakes and other seismic events are the primary forces that shape the Earth and rearrange the tectonic plates that make up the continents and ocean.

On land, a network of strategically placed seismic monitoring stations lets uslocate earthquakes when they occur. But in the middle of the ocean, there arefew places to put recorders unless they are specially designed to work in theocean or on the ocean floor. Somemonitoring stations on ocean islands do help, but scientists for many years havesought better ways to monitor seismicity in the worlds ocean basins. SinceAugust of 1991, the Acoustic Monitoring Project of the National Oceanic and AtmosphericAdministrations (NOAA) VENTS Program has carried out continuous monitoringof mid-ocean ridge systems in the eastern Pacific using the U.S. Navy SOund SUrveillanceSystem (SOSUS) network.

SOSUS was installed by the US Navy beginning in the mid-1950s for classifiedantisubmarine warfare and surveillance during the Cold War. SOSUS consists ofgroups of hydrophones that hear and record sound waves generatedby seismic events, submarines, or whales, for example. The hydrophones are connectedby undersea communication cables to facilities on shore. Individual hydrophonearrays are installed primarily on continental slopes and seamounts at locationsthat are unobstructed by seafloor features that would block sound wave transmissionacross large areas of the ocean.

In October of 1990, the Navy gave NOAA access to SOSUS arrays in the North Pacificto monitor oceanic phenomena of environmental or scientific interest. Data collectionsystems developed by NOAAs VENTS Program began operating in August of1991. Acoustic signals from the north Pacific Ocean are monitored and recordedat NOAAs Pacific Marine Environmental Laboratory (PMEL) facility in Newport,Oregon. This is the nations primary facility for continuously monitoringlow-level seismicity in the northeast Pacific and for detecting volcanic activityalong the mid-ocean ridge, as it is happening.

The system demonstrated that it could successfully listen to eruptions takingplace on the Juan de Fuca and Gorda Ridges using SOSUS. To expand the system'slistening capabilities, our colleagues at the NOAAs Hatfield Marine Center,in Newport, Oregon, under the direction of Dr. Chris Fox, figured out how toput self-recording hydrophones into the ocean at six locations in the EasternPacific Ocean, so that they can hear when eruptions on the mid-oceanridge crest take place.

In May of 1996, this array of autonomous hydrophones began long-term monitoring of portions of the mid-ocean ridge in the central equatorial Pacific (the East Pacific Rise and Galápagos Ridge). The Autonomous Hydrophone Array (AHA) consists of six hydrophones spaced many hundreds of kilometers apart. These hydrophones have been nicknamed Haruphones after Haru Matsumoto, the NOAA engineer who developed them.

Haru phones are placed in a special part of the upper ocean between 600 m and 1200 m depth, called the SOFAR (SOund Fixing And Ranging) channel. This is the same sound channel that the SOSUS array uses to listen for submarines. The SOFAR channel acts as a pipeline for sounds in the ocean, allowing sound to travel long distances and still be detected. Since the mid-1940s when the SOFAR channel was discovered, scientists, engineers and the military from different countries have used this underwater pipeline to help them listen for submarines and whales and to study how sound travels in the ocean. Now ocean scientists are using it to study volcanic and tectonic processes on the mid-ocean ridge crest. 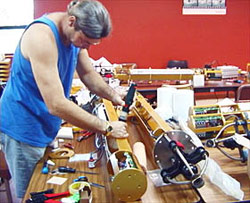 Matt Fowler, a NOAA engineer, works on a hydrophone, or Haruphone, before it is deployed in the ocean.