ABE is a robot. You'll notice that its name is spelled with capital letters. The "E" stands for Explorer. The B stands for Benthic, which means the bottom of the oceanthats where ABE explores. The A is for Autonomous, which means by itself or without any help.

The last part is what makes ABE different from other seafloor-exploring vehicles designed and built at Woods Hole Oceanographic Institution. People dive in the submersible Alvin. Jason is a deep-diving robot, but is attached by a long tetherlike a long leash to the surface ship. The tether supplies power to Jason and allows a pilot on the ship to see through Jasons cameras and to control it using a joystick.

ABE was designed to fly free, without a tether, near the seafloor. Placed overboard, it spirals downward over several hours to the seafloor. Once there, it is programmed to navigate a pre-selected pathmapping the seafloor with sonar, using a CTD to collect information on the characteristics of seawater, or measuring the magnetism of seafloor rocks. When ABE has completed its mission, it rises back to the surface, where it is retrieved.

ABEs most remarkable feature is its ability to travel at roughly the same altitude above the seafloor, even when the seafloor rises and falls. If ABEs sonar detects a volcano ahead of it, it will stop, rise, and fly over the volcano, and then lower itself back to the same altitude on the other side. Imagine trying to photograph a mountainous landscape from an airplane flying at a level altitude. Youd see the peaks well, but miss interesting details in deep canyons or valleys. ABE can follow the contours of the seafloor.

ABE can be programmed, for example, to maintain a constant altitude of 10 meters above the seafloor during a typical 6- to 12-hour mission that covers 20 to 25 kilometers. ABE has five thrusters that automatically adjust its position over changing seafloor topography. Its design also prevents it from rolling from side to side or pitching forward or back, giving it a very stable ride. Humans cannot control vehicles underwater so precisely.

ABE does indeed resemble the Starship Enterprise in the original Star Trek serieswith three torpedo-shaped compartments connected by struts in the shape of a triangle. (ABE's inventors, Al Bradley, Dana Yoerger and Barrie Walden, clearly have a sense of humor: They stenciled the same numbers on ABE that adorned the side of the Starship Enterprise, NCC-1701.) ABEs two upper red pontoons contain glass balls to provide buoyancy. This keeps ABE floating upright. Its third compartment (the lower pod) contains its computer brains and the batteries that power ABE and its instruments for 6 to 30 hours, depending on how much power the instruments require.

Because ABE is autonomous, it can stay at the bottom much longer than a human-occupied vehicle like Alvin. Traveling at slightly more than 1mile per hour, ABE can create a finely textured map of seafloor that coversabout 1 by 2 kilometers during one dive.

ABE gives scientists the capability to use more vehicles at the same timeto collect more information. Last year, ABE was deployed and left undersea for 20 hours, while the ship moved to a site 30 kilometers away, where Alvin dove and camera tows or CTD casts were taken. Then the ship returned to pick up ABE.

In the future, ABE and other Autonomous Underwater Vehicles (AUVs) will be designed to dive, collect data, dock at underwater stations, and go to sleep, until scientistsperhaps directly from their office deskssignal them to wakeup and do other research missions. AUVs will also play a major role at seafloor observatories, where they may be triggered to wake up to investigate a sudden, short event on the seafloor that ends longs before a ship could ever reach the sitesuch as an earthquake or volcanic eruption. 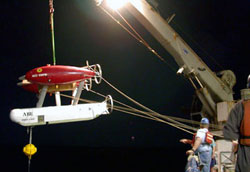